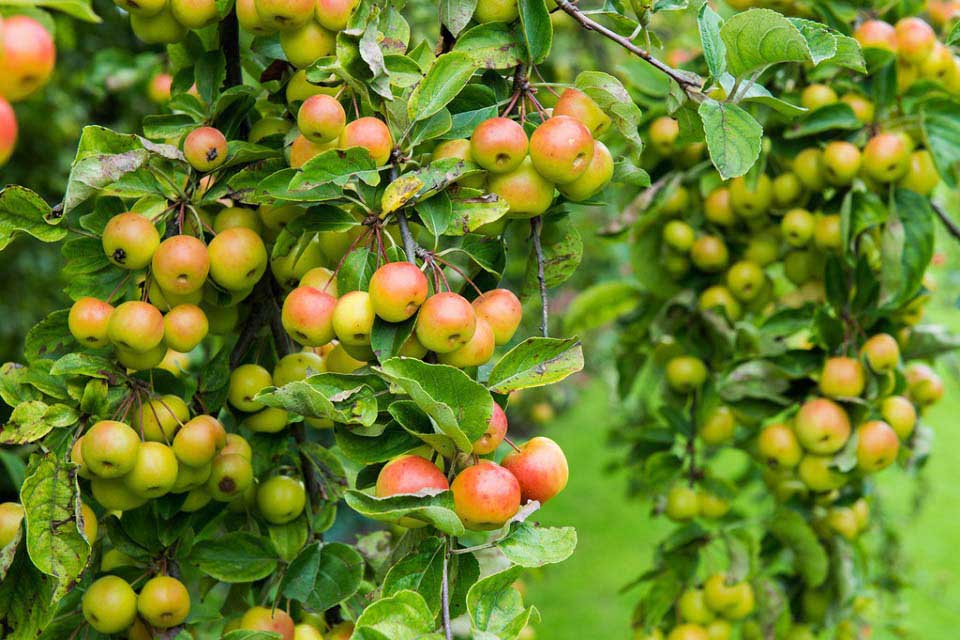 Paradise, that elusive, mystical place we all long for. A garden of exquisite beauty and abundance, at the heart of which we must surely find an apple tree. Day and night its blossoms exude a seductive fragrance and a symphony of bees suckle, symbiotically fertilising the delicate flowers. By autumn the branches hang low, weighted down by the swelling fruit, inviting us to climb upon its boughs and sit with the blackbirds, eagerly watching for the first signs of ripening. And when we at last take a bite of the apple, imbibing its juicy deliciousness and super nutritiousness will we, like Merlin, learn the secrets of the earth and the movements of the planets? Will we be transported to the land of the gods? In the Garden of Hesperides nine maidens join hands around the sacred apple tree and a serpent coils at its roots. May we taste immortality in its fruit? Or will the knowledge we gain in this garden of Eden fill us with shame so that we are cast out and must ever more seek the elusive, original apple grove?

If so we could begin our search in Kazakhstan. There, growing wild on the slopes of the Tien Shon mountains is Malus Sieverisii the mother of all apple trees. We know this due of the work of Russian plant hunter Nikolai Vavilov, but his knowledge might have been lost to us as Nikolai died in prison under Stalin. However after the fall of communism and the collapse of the Soviet Union in 1991 a Kazakh student of Nikolai’s was at last able to make known his findings. Extraordinarily the apple tree is the most complex plant known to man. It is heterozygous meaning that it requires a different species and an insect partner to pollinate it, so each new plant is a new species. There are over 7,500 known varieties of apple tree world wide and the only way to propagate the same species is by grafting.

The apple has flourished in the moderate temperatures and ample rainfall of Britain. Our climate allows the fruit to ripen slowly, thus fully developing the potential of its flavour. The National Apple Collection at Brogdale Horticultural Trust in Faversham has almost 2,500 varieties with names like Acklam Russets, Barnack Beauty, Nutmeg Pippin and Knobby Russet. It is generally enthusiasts rather than commercial growers who maintain these varieties, the range available in shops is limited and we may often find ourselves buying apples from elsewhere in the world. However, the charity Common Ground started Apple Day in 1990 and each year on October 21st there are festivals and events held all over the country raising awareness of the wonderful varieties.

Interestingly, the seeds of orchard apples revert to ancestral types if sown in the wild. The single variety native to Britain is the crab apple a small tree with brown flaky bark, sometimes bearing the thorns all crab apples once had, being of the rose family. It has soft oval leaves with pointed tips that are food for the caterpillars of many moths. It is home to over 90 species of insect and has lovely pink flowers in spring, providing food for many pollinators and especially supporting our bee populations. The small bitter fruit can be made into jam, jelly and wine and is food for many birds and animals including mice, voles, foxes, badgers, rabbits, deer and of course wild boar. The pips have a cyanide coating and so pass through the digestive systems of these animals ensuring that any new trees are propagated at some distance from the parent.

Revered by the Druids as one of the seven chief trees and the most common to host mistletoe, the apple is associated with shapeshifting and journeys to the Otherworld. Magical apple trees feature in many folk and fairy tales. The name Avalon is derived from an old Irish word meaning “place of apple trees” and in this context the tree symbolises the hardship, sacrifice and self-denial that the warrior/magician has to undergo to make the journey to Avalon and back. In Druidic lore the essence of the sacred apples of the “Isle of the Blessed” was recognised as three drops of liquid which escaped from Ceridwen’s cauldron. From these rose three streams corresponding to the three pillars of the Druidic tree of life. They represent male, female and the united expression of both, and also the three rays of light equating to vision, symbols and the understanding of these two. This is the Awen from which all art is born.

Apple was considered food of the gods and a universal symbol of love, fertility, generosity and abundance. It teaches us to give all we have in complete trust that we will be replenished. This affirms self-worth and opens the way for receiving. In Ancient Greece the apple was associated with Aphrodite, the goddess of love and when cut, shows her five pointed star.

The reverence and appreciation of the apple is still alive in Britain today in a ritual which surely has its roots in Druidic custom. During January in community orchards all over the country, folk still gather to wassail the fruit trees. They affirm community bonds around a fire, drinking wassail (spiced cider and apple juice) whilst children run and climb among the bare twisty trees. Then they parade together, singing, blowing horns and banging drums to encourage the trees to be abundant in the coming cycle. They make offerings of the remaining wassail to the roots of the trees and hang bread soaked in cider in the branches for the birds. Thus may we discover that paradise is not so elusive and mystical after all. The gift of the apple is the gift of community, love and sharing and in this we may make our own heaven on earth.