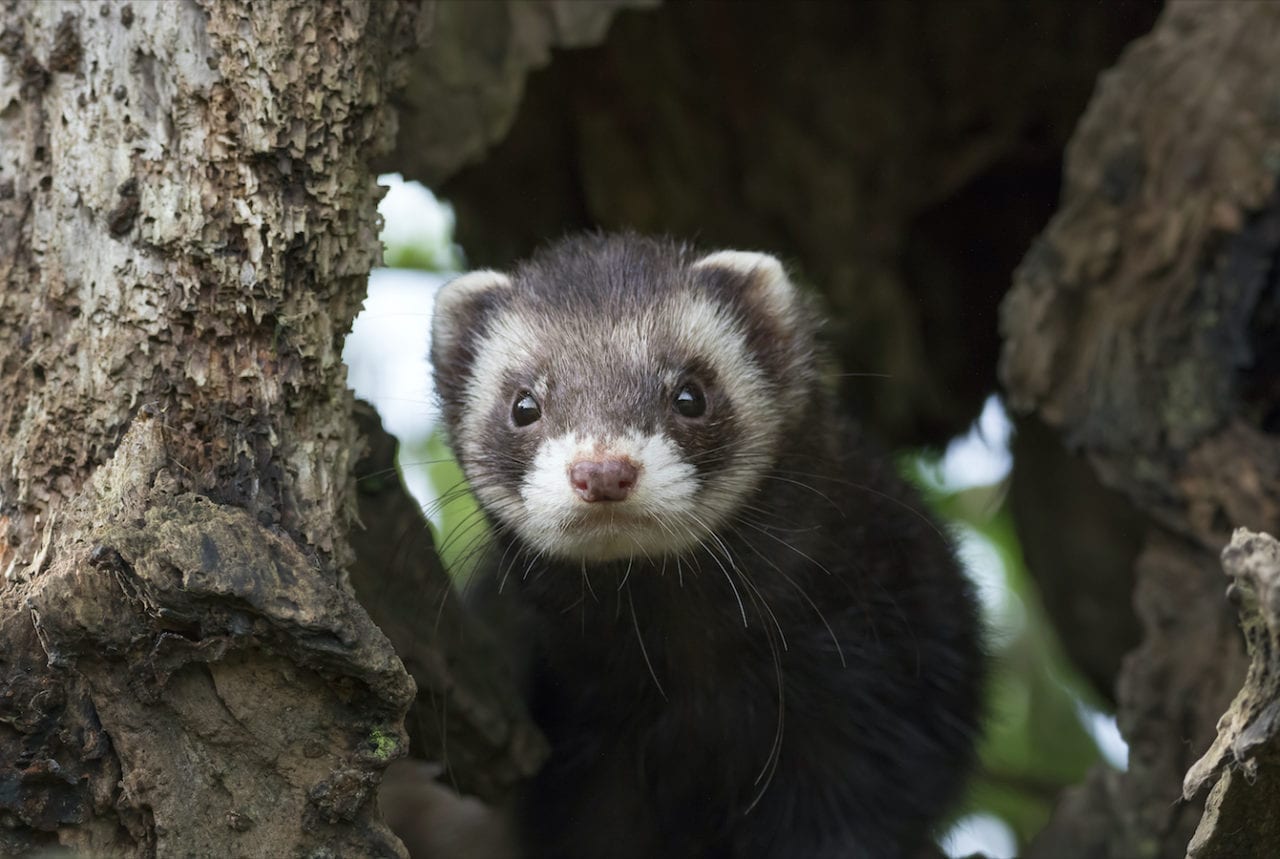 European polecats have an undeniably roguish air. Perhaps it’s their masked, bandit-like appearance, or possibly their association in Victorian times with vagabonds. So vilified were they at this time, that they were almost hunted to extinction in Britain. In days before chicken-wire, they had a reputation for taking poultry, and they were also hunted for their fur. They were made even more unpopular by their skunk-like penchant for releasing a foul smell from their anal glands when threatened. In fact, ‘polecat’ was for a long time used as an insult. Their Latin name, Mustela putorius reflects their unsavoury status, as putorius means stench, and is the root word for the English word putrid. Interestingly, their Welsh name, ffwlbart, is not of Celtic origin. Rather, it mimics the Latin in its olfactory origin, and comes from the Middle English ‘foul mart’.

Their wide-spread unpopularity saw the polecat nearly extinct by the beginning of the 20th century. Luckily, a small area in mid-Wales remained a stronghold for the species. As their population in this area increased, polecats have since spread. Beginning in the midlands, they have steadily increased their range and can be found as far north as Scotland, and as far south as Cornwall. Their steady rise has been given a helping hand by various reintroduction programmes in various counties, including Herefordshire and Cumbria. Their increased numbers are coupled with a more tolerant viewpoint of them from humans, and they are now protected under The Wildlife and Countryside Act 1981.

In fact, the polecat’s status has been elevated to such a degree that people willingly take their domesticated cousins, ferrets, into their homes as pets. Escaped ferrets do hybridise with wild polecats, and hybrids can be identified by lighter fur on their back and faces. Wild polecats are two-toned: they have a dark brown coat with buff underfur. White stripes on their dark faces give them the famous ‘bandit-like’ appearance. They have small ears, often tipped white, and short dark tails.

They are at home in many habitats, living in woodlands, farmland, grassland, and riverbanks. They favour cosy nooks, often taking residence in tree hollows, old rabbit burrows, haystacks, log piles and dry-stone walls. They eat a wide range of food, including frogs, small rodents and rabbits. They hunt at night, and despite being in the mustelid family, stalk their prey quietly, rather like cats. They breed annually and have litters of between 4-6 kits in the early summer months. Most of their activity, including hunting, happens at night. They do not hibernate, but become less active during the cold months. They are highly intelligent creatures, and in the past were trained to flush out rabbit holes, often wearing a muzzle so they didn’t claim the bounty for themselves!

As mustelids, their British relatives include the stoat, weasel, badger, otter and pine marten. At 32-45cm long, they are slightly bigger than weasels, and smaller than pine martens. Although they are definite reintroduction success story, and have been brought back from the brink of extinction, they are not completely out of the woods just yet. They can be poisoned by eating rodents that have been poisoned, and they are still unpopular with some gamekeepers. Wild spaces are ideal for the recovery of the polecat, as it lessens the contact they have with humans, and in turn the conflicts that can arise when this happens.