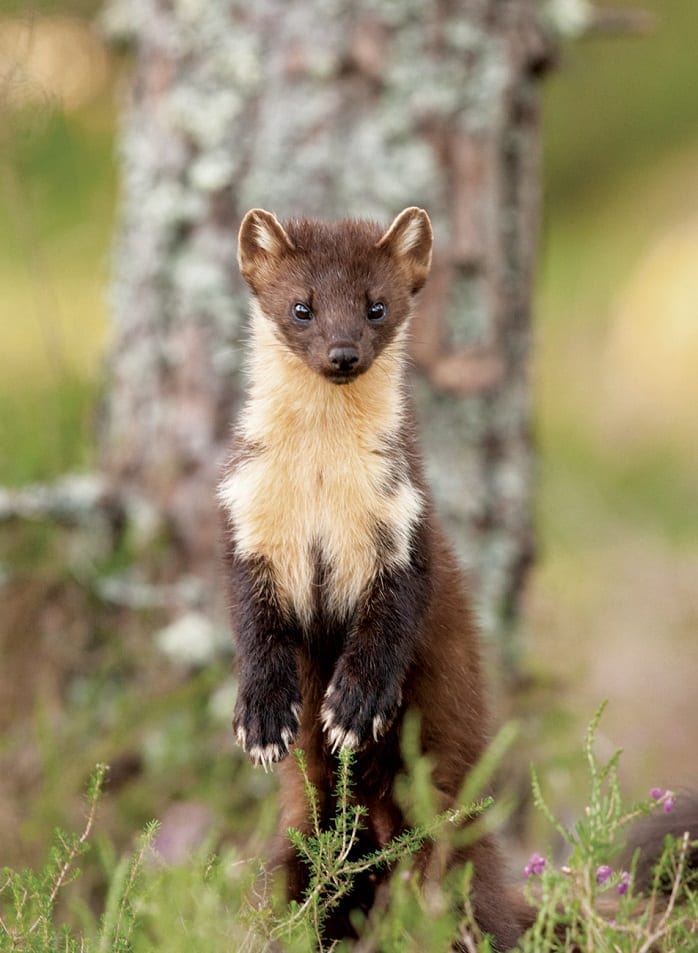 In December 2015 we reported on a visit with the Vincent Wildlife Trust (VWT) working to support the translocation of ten male and ten female pine marten’s (Martes martes) from Scotland to Wales.

This exciting project has been able to follow pine martens activity through radio tracking and camera traps since their release in August 2015. Information such as dietary habits and extent of ranging, up to ten kilometres in one instance, have been obtained. In the extent of their travels, one went as far north as the Dyfi, and two went south to the Tywi Forest, one of the areas with a remnant population of red squirrel. Of the adults, three died through predation and, in contrast three of the ten females successfully bred, resulting in five healthy kits! Recent recapture and assessment of the existing adults also show them to be healthy with similar or more than their weight on their original capture.

This is the first time a carnivore has been actively re-established in Britain and it is believed that without intervention the pine marten would have become extinct. With the birth of five kits and plans for the translocation of twenty more adults to the area the project is certainly growing.

The omniverous pine marten is the UK’s second rarest apex predator (after the Wildcat). Their diet includes small mammals such as voles, birds, berries and eggs, insects and they are also efficient scavengers. Their demise came about from habitat loss (deforestation) along with hunting for their pelts and eradication as a threat to game birds. Interestingly for rewilding, and the re-establishment of natural balance we are seeing pine marten’s hunt grey squirrel. In Ireland, PhD Student, Catherine McNicol is currently studying the level of grey squirrel predation by pine martens. It is anticipated that this will have a knock on benefit to the native red squirrel.

The Vincent Wildlife Trust are also working in Ireland to support the 2,700+ strong pine marten population (2005 – 2007) with research into genetic diversity and population-spread trends through collection and analysis of fur and scat samples. A leaflet has been published identifying practical steps to protect game and domestic fowl from pine martens. The VWT are also working with Ireland’s National Parks and Wildlife Service and key interest groups to develop ‘ultimate predator proof’ game/fowl pens.

Here in Wales as well as ongoing surveys, research and analysis the next step of this 6 year project is to source, trap and translocate a further 20 breeding age pine martens from Scotland, again, in August. The welcome newcomers will also wear new gps tracking devices.

More information and some delightful and fascinating footage of pine martens (from Wales and further away) can be found on the Vincent Wildlife Trust website. This includes ‘Wild in Wales’ a new video asking key figures related to Wales ‘what does it mean to you to have pine marten’s here?’  http://www.pine-marten-recovery-project.org.uk/videos