Celtic Rainforest is the name given to the temperate rainforest found in the western parts of the British Isles. Other names for this woodland type are ‘upland oakwoods’ and ‘Atlantic oakwoods’. The native forest previously dominated the landscape but now only survives in small fragments totalling no more than 2% of the land area.

At Bwlch Corog the ancient woodland Coed Llechwedd Einion is about 4 hectares (10 acres) in area. Additionally there are areas planted with larch and oak to make a total woodland area of about 10 hectares (25 acres).

The high rainfall and mild climate of the geographical zone contribute to the special features of the Celtic Rainforest. Additionally, the remnants are often found on steep ground above rivers, and this is the case at Bwlch Corog where most of the woodland is along the steep-sided river valley. The habitat is very rich in ferns, mosses, liverworts and lichens, many of them being rare species. These are present as ground flora as well as covering the trunks and branches of trees. With more than 500 species of plants and animals associated with this habitat, these ancient woodlands are massively important for biodiversity. 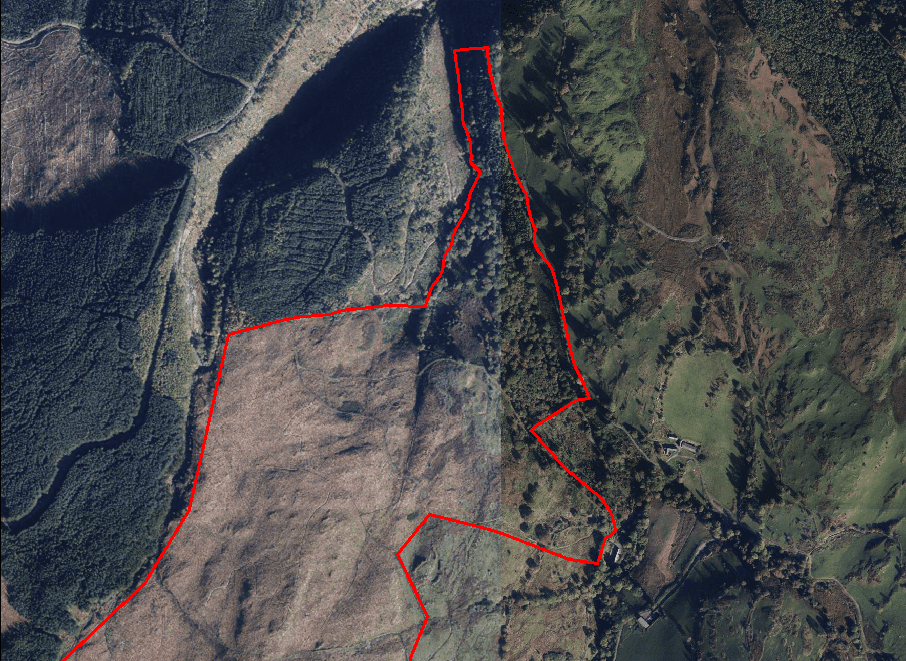 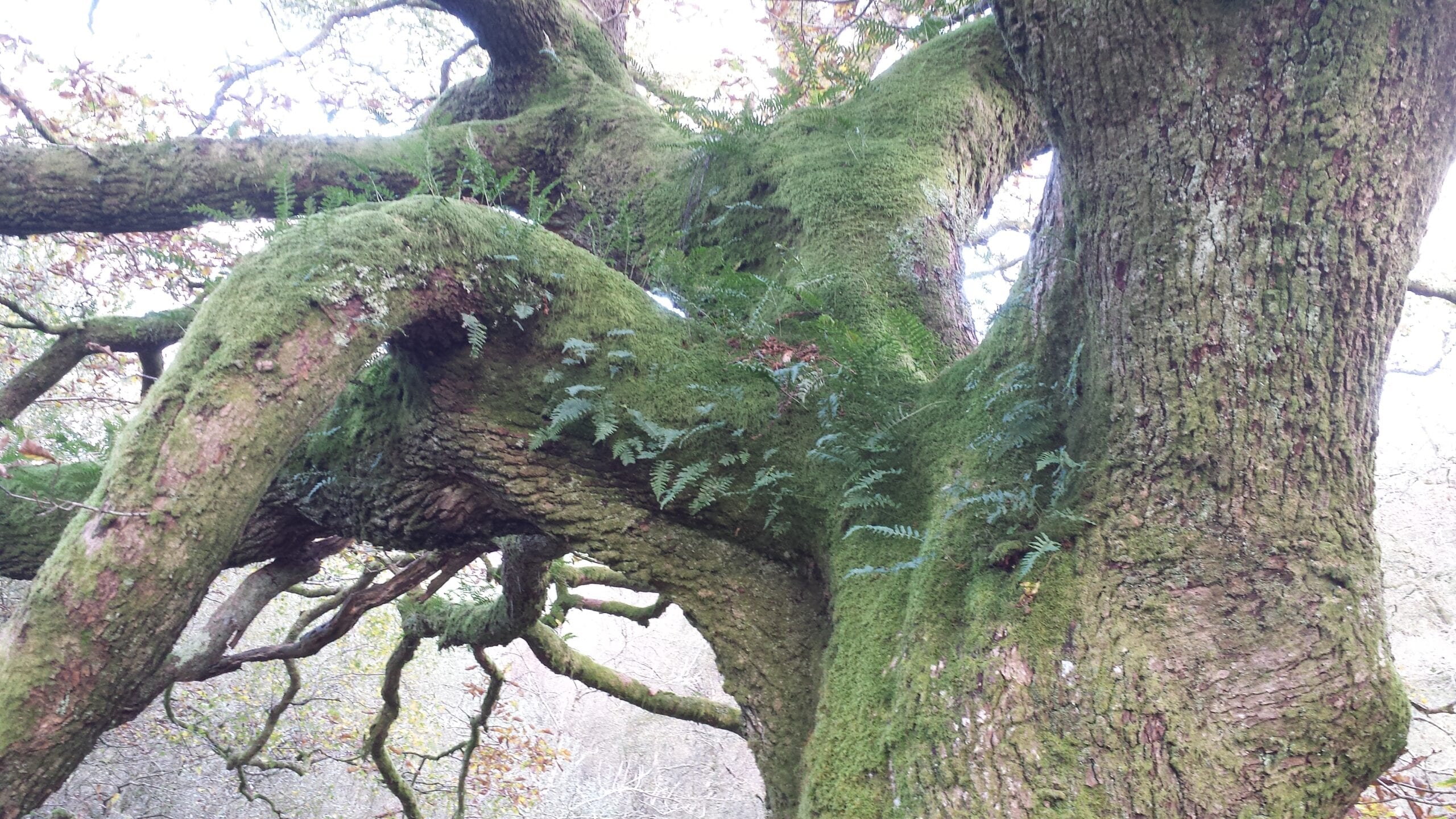 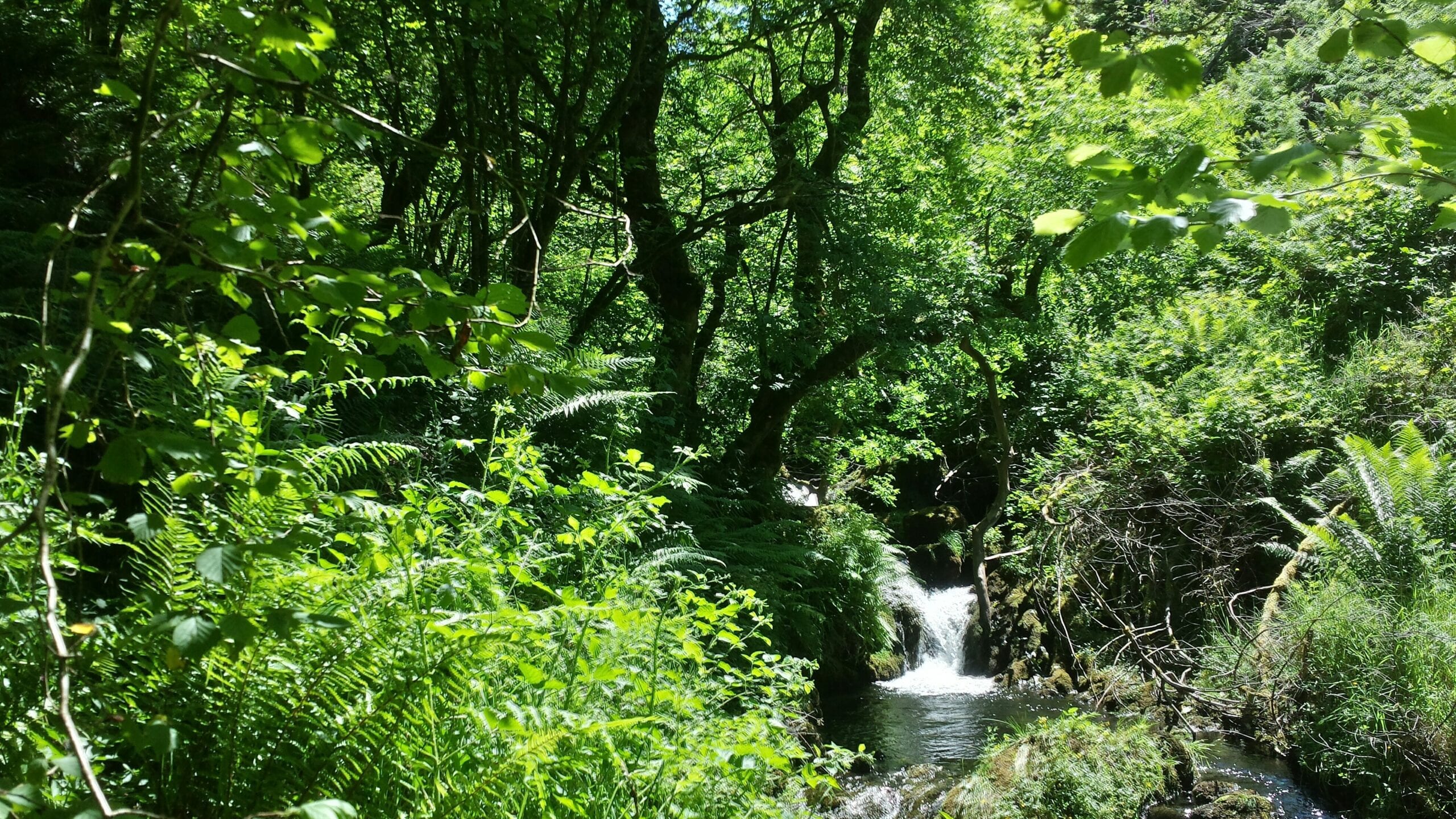 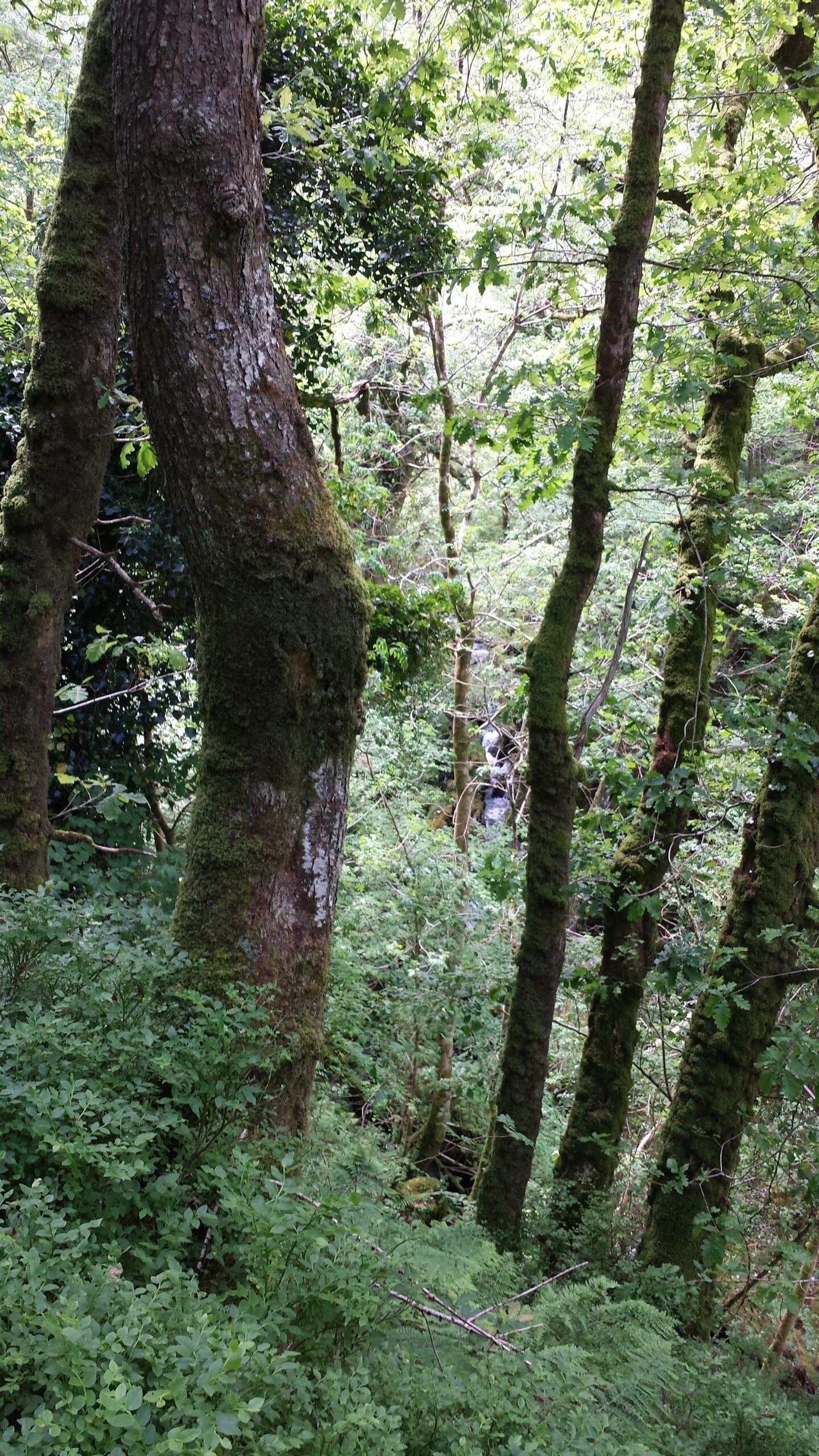 Further down the valley there are two species that we know from pollen records used to grow at Bwlch Corog:
lime (Tilia cordata)
wych elm (Ulmus glabra)

Woodland was the predominant habitat across all elevations of Bwlch Corog in the first few thousand years after the last ice age. Even the highest point at 388 metres above sea level is below the natural tree line for Wales.

Pollen analysis of soil cores taken from deep peat at Bwlch Corog provides records going back 5,300 years before the present day. It reveals a fascinating and complex history of vegetation change related to climate cycles and human influence. Generally, woodland increased during warmer periods and decreased during colder and wetter periods. Additionally, woodland cover was related to humans clearing land for grazing, which occurred more than once.

The composition of tree species and other plants also varied considerably according to climate and land use. Alder was more prevalent until about 2,000 years ago and oak increased over the last 2,000 years, while birch has generally remained dominant. 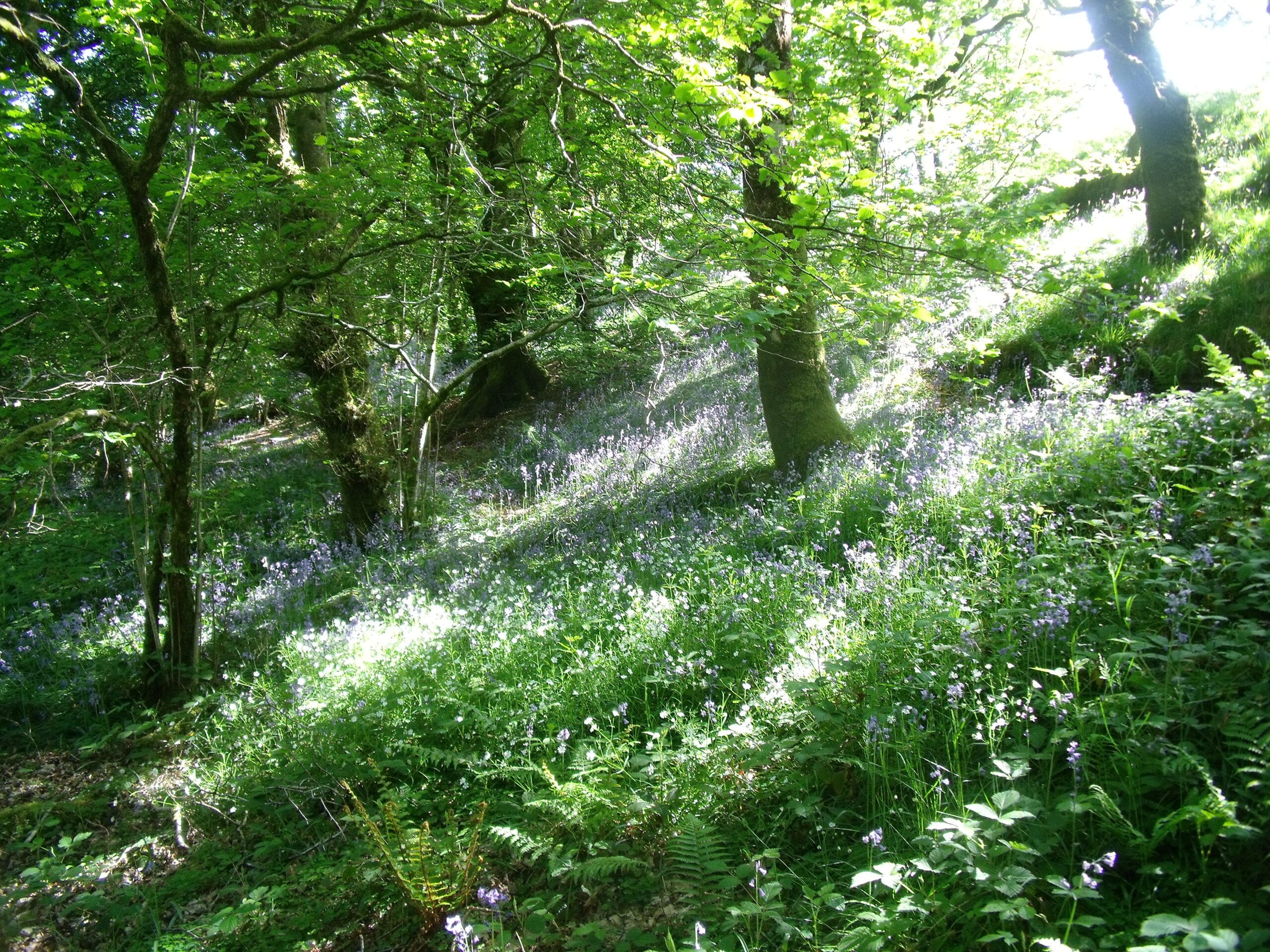 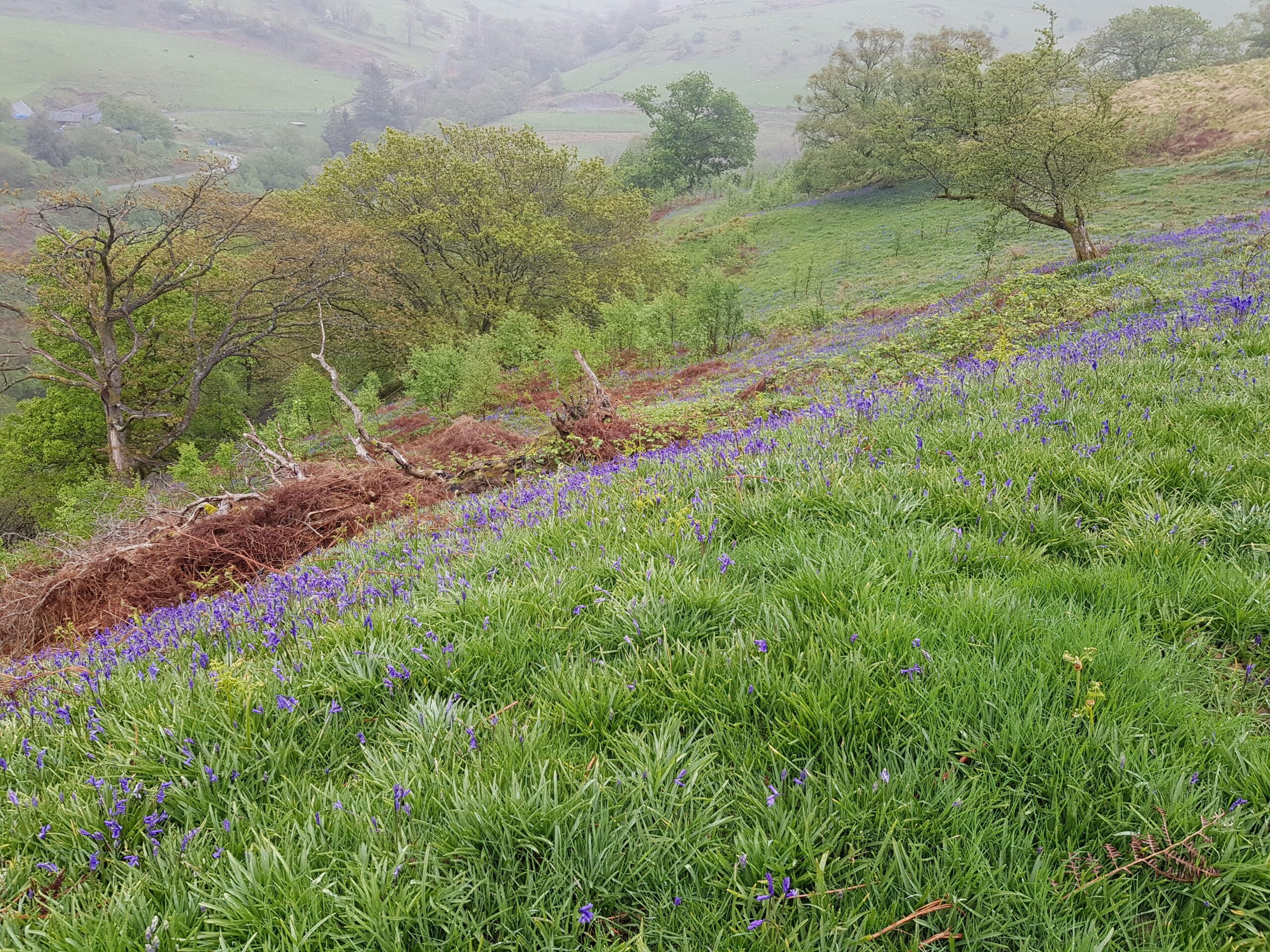 Bwlch Corog has a stunning show of bluebells during the late spring, within the ancient woodland as well as across extensive swathes of open land. This woodland flora shows where there must have been woodland cover until relatively recently.

The birch species found on the site reflect the local diversity with downy birch (Betula pubescens), silver birch (Betula pendula) and the little known Iberian white birch (Betula celtiberica). The latter was thought to be endemic to the Iberian peninsular until recent years when the renowned Ceredigion ecologist Arthur Chater began finding examples of it in ancient woodlands on the western fringe of Wales. Arthur Chater visited Bwlch Corog in 2017 and identified several individual trees of this species in our ancient woodland. 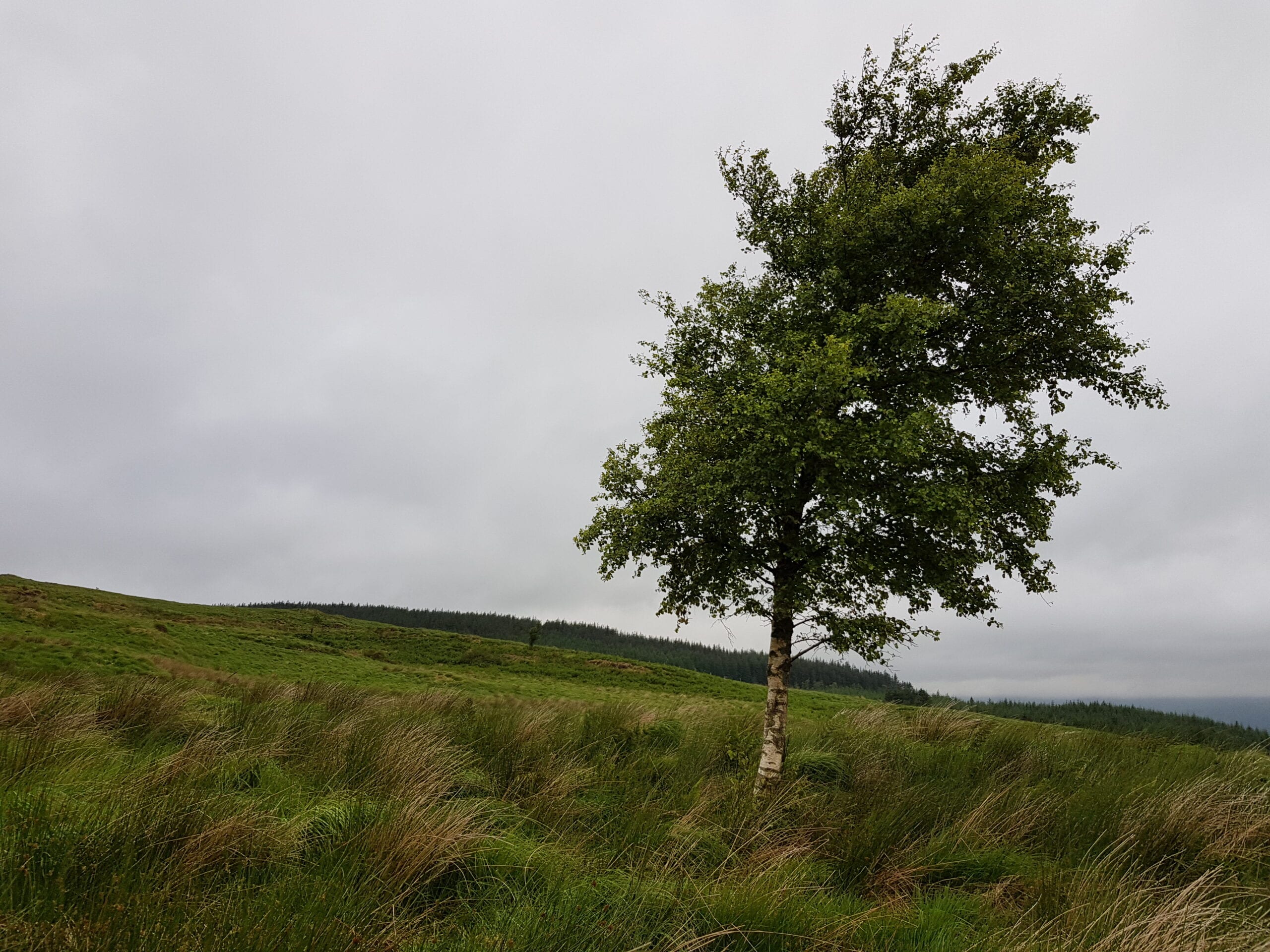 One of the priorities for Bwlch Corog is to increase tree cover to restore a large area of Celtic Rainforest along with more isolated groups and single trees within the areas of open land.

This is being achieved through a combination of tree planting and natural regeneration, and we are using a range of techniques to establish trees in the presence of large herbivores. A couple of small areas which are inaccessible to the herbivores have been planted at a reasonably high density. And some areas have been colonised by natural regeneration at high density, mainly birch. We are assisting with this process with the use of temporary fencing. Natural regeneration of single rowan trees is occurring at very low density across a wide area of the moorland. 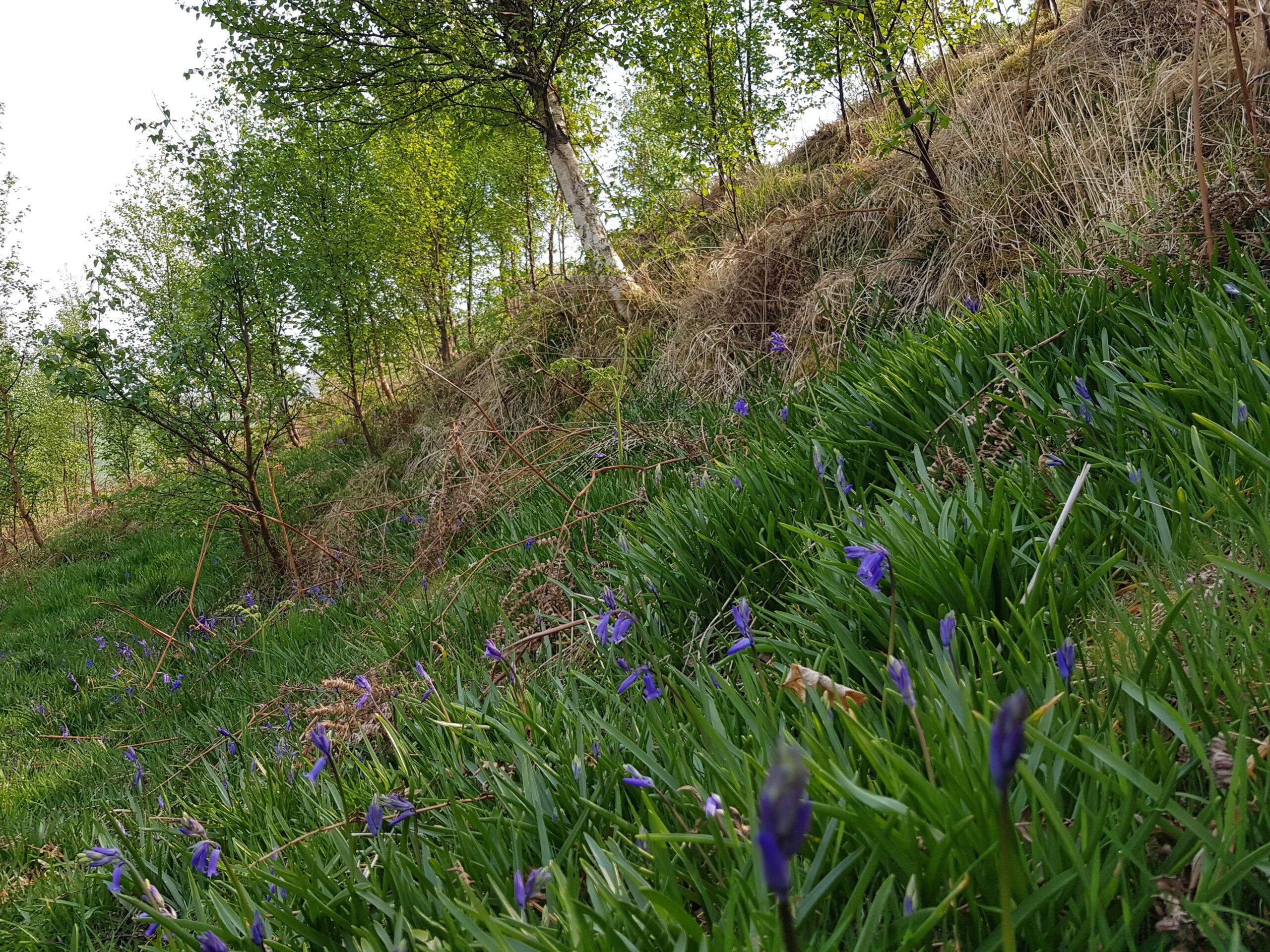 ‘No fence’ tree planting is the main focus of our intervention to increase tree cover: small groups or single trees are planted in specific locations that are inaccessible to browsing. The trees are planted on steep ground or within existing vegetation cover so that the animals cannot see or reach the trees. These are techniques developed by Steve Watson in North Wales, based on close observation of how trees establish naturally in the presence of herbivores. We are developing these techniques in the context of our own site, which has few steep drops and little in the way of existing vegetation cover. By observing the habitual grazing areas of the wild horses we have identified some unfrequented areas suitable for planting trees. And we are planting small groups of thorn trees to create cover for later planting of other tree species amongst the thorns. Most of the trees we plant are grown from seed collected at Bwlch Corog. 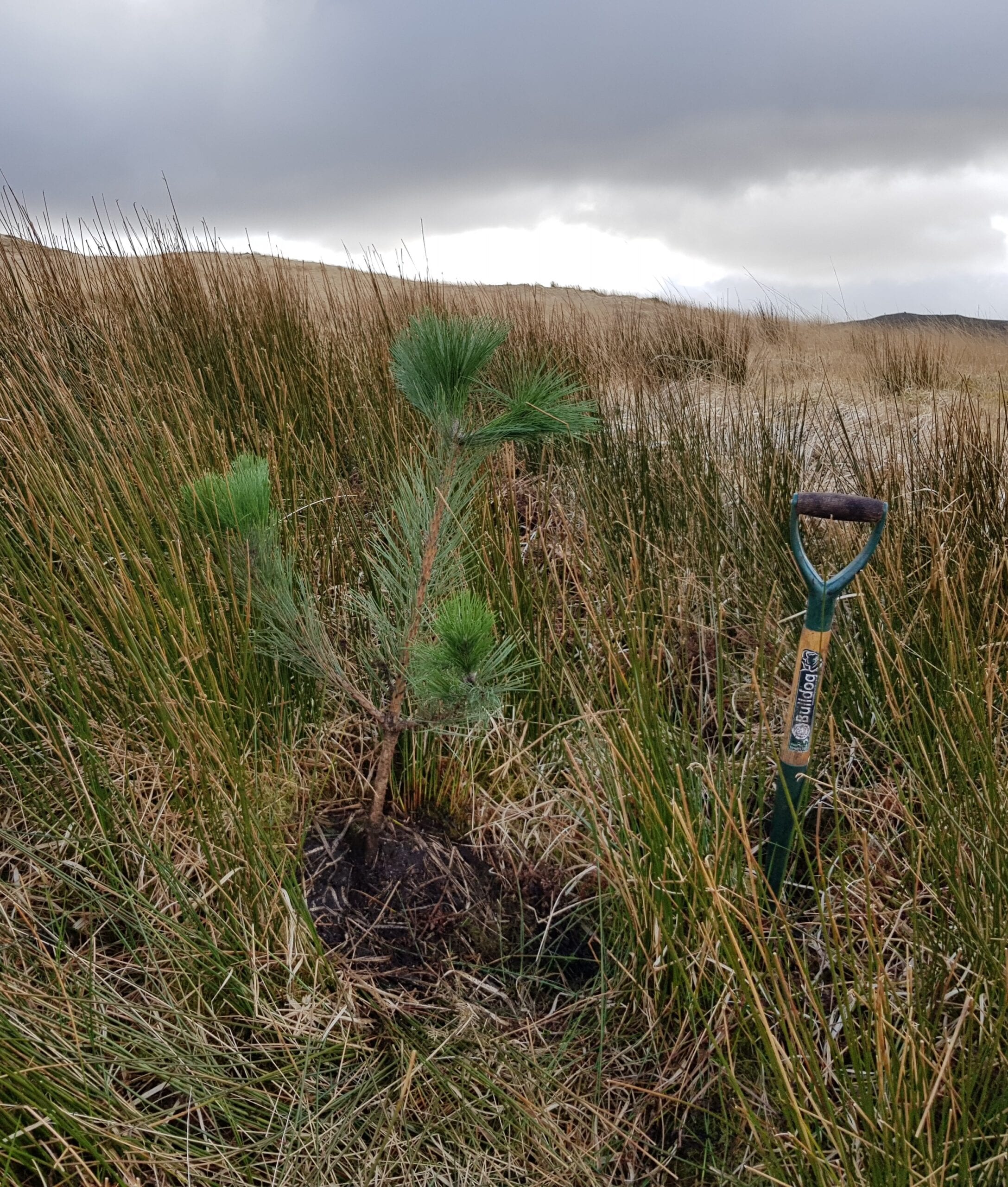 For more detail on our woodlands see Ancient Woodland Report on Bwlch Corog by Adam Thorogood.