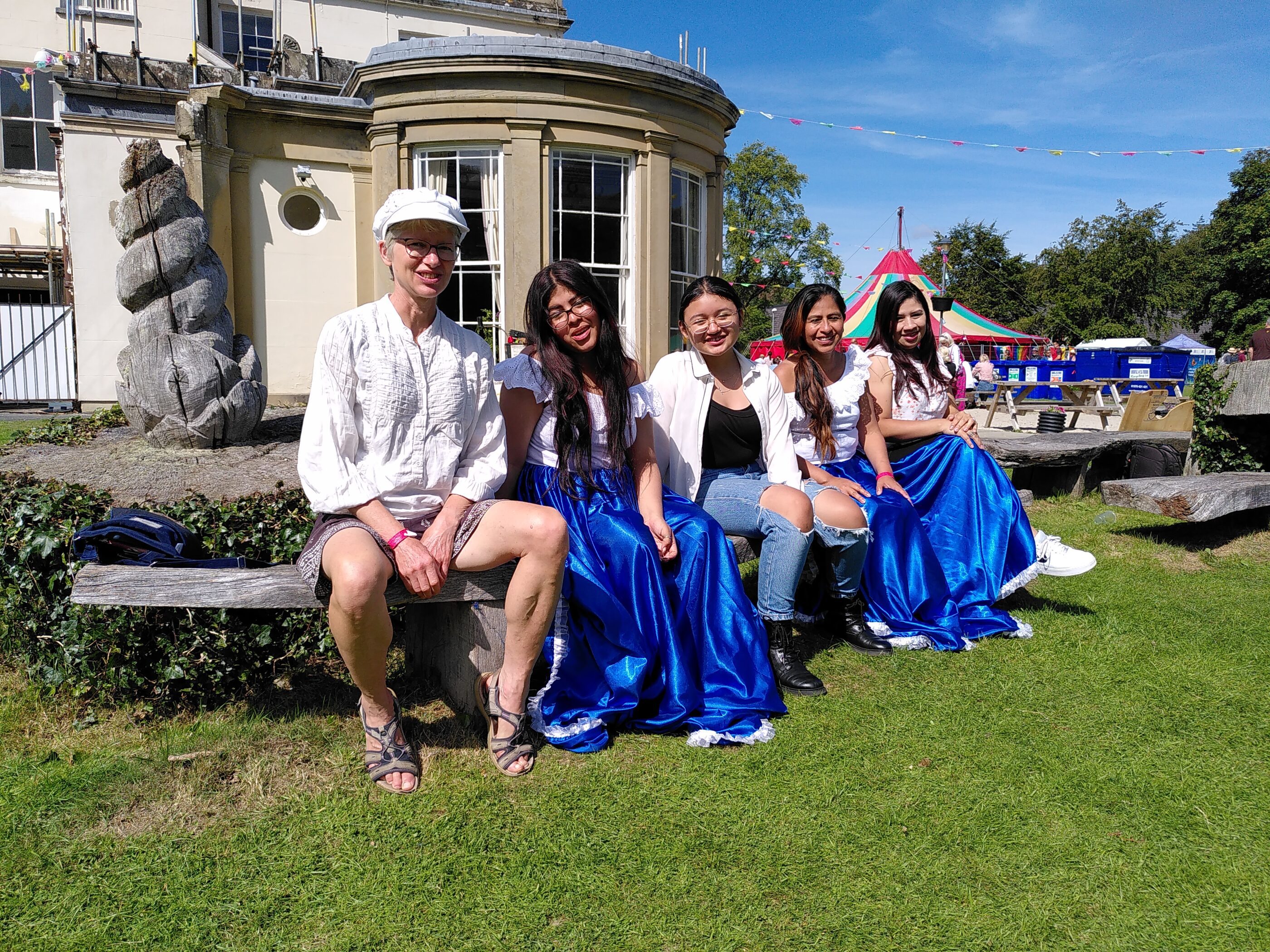 Our asylum seeker friends from El Salvador, who regularly volunteer at the wildwood, attended Machynlleth’s El Sueño Existe festival. We joined them there with our stall and made some good contacts.

For over a year now, we have been welcoming refugees and asylum seekers on our monthly volunteer work days, in the company of our partners Wolverhampton City of Sanctuary in the West Midlands. You can read about this partnership and the mutual benefits it brings in a previous news item. Our regular volunteers include people originating from Ethiopia, Iran and El Salvador who have all become valued members of the team.

Earlier this summer the opportunity arose for some of our refugee friends to attend the El Sueño Existe festival in Machynlleth in August. This festival celebrates the cultures of Wales and Latin America and attracts people from far and wide. It includes talks and films on political themes and of course a lot of brilliant Latin American music.

Our contacts in Wolverhampton are George and Jan Reiss. George explains how this opportunity arose: ‘It all started with a coincidence when Jan and I took Esmeralda and Alessandra from El Salvador to volunteer with Cambrian Wildwood at Bwlch Corog a few miles from Machynlleth. Another volunteer called Mat said, “you know the festival in Machynlleth has El Salvador as one of its themes this year?” We didn’t even know there was a festival there at all!’

Mat, chair of our board of trustees, put George in touch with the festival organisers, who were very enthusiastic and supportive, offering a dozen free tickets for the refugees, who could otherwise never have afforded to go. We were also offered a pitch for a stall to promote the work of Coetir Anian and City of Sanctuary.

The three days of festival proved to be an enjoyable and significant experience. Esmeralda spoke about the problems in El Salvador with the constant threat of violence and her own fears for the safety of her family, and also about the important help provided by organisations which support asylum seekers in the UK. George then presented a talk about City of Sanctuary and Coetir Anian. As a closing act for the festival, three of the Salvadoran women donned flowing blue skirts and performed a traditional dance. 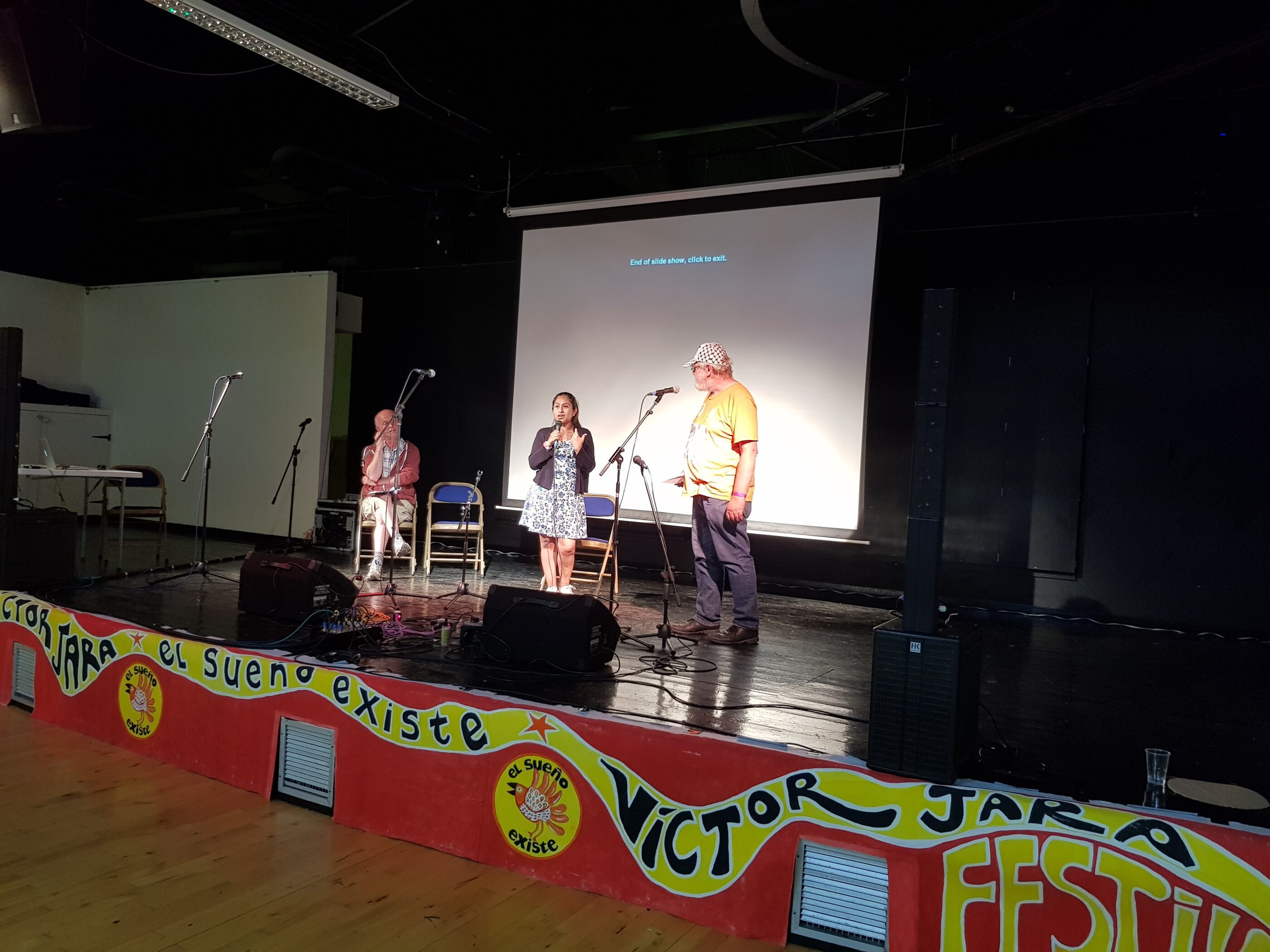 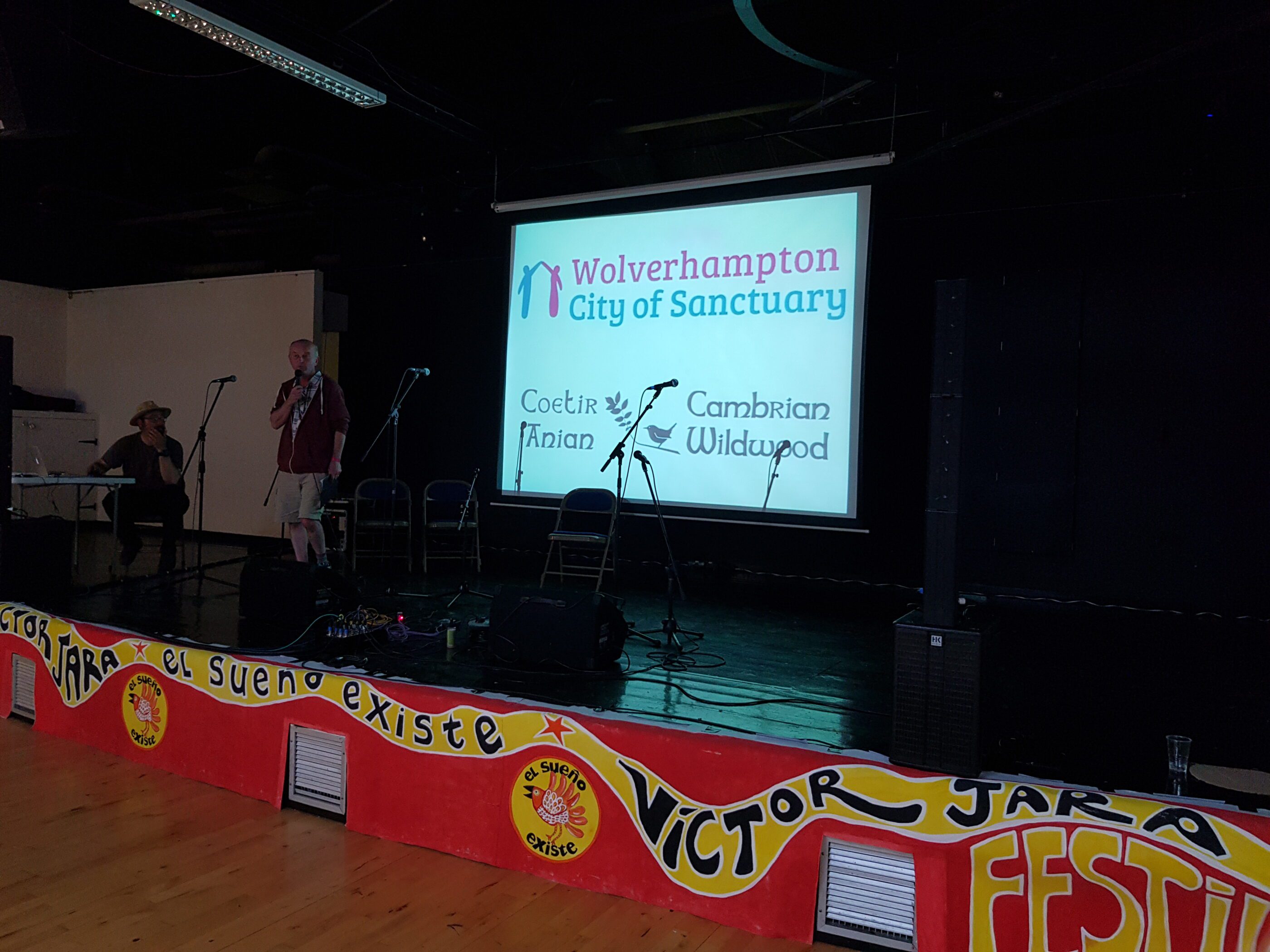 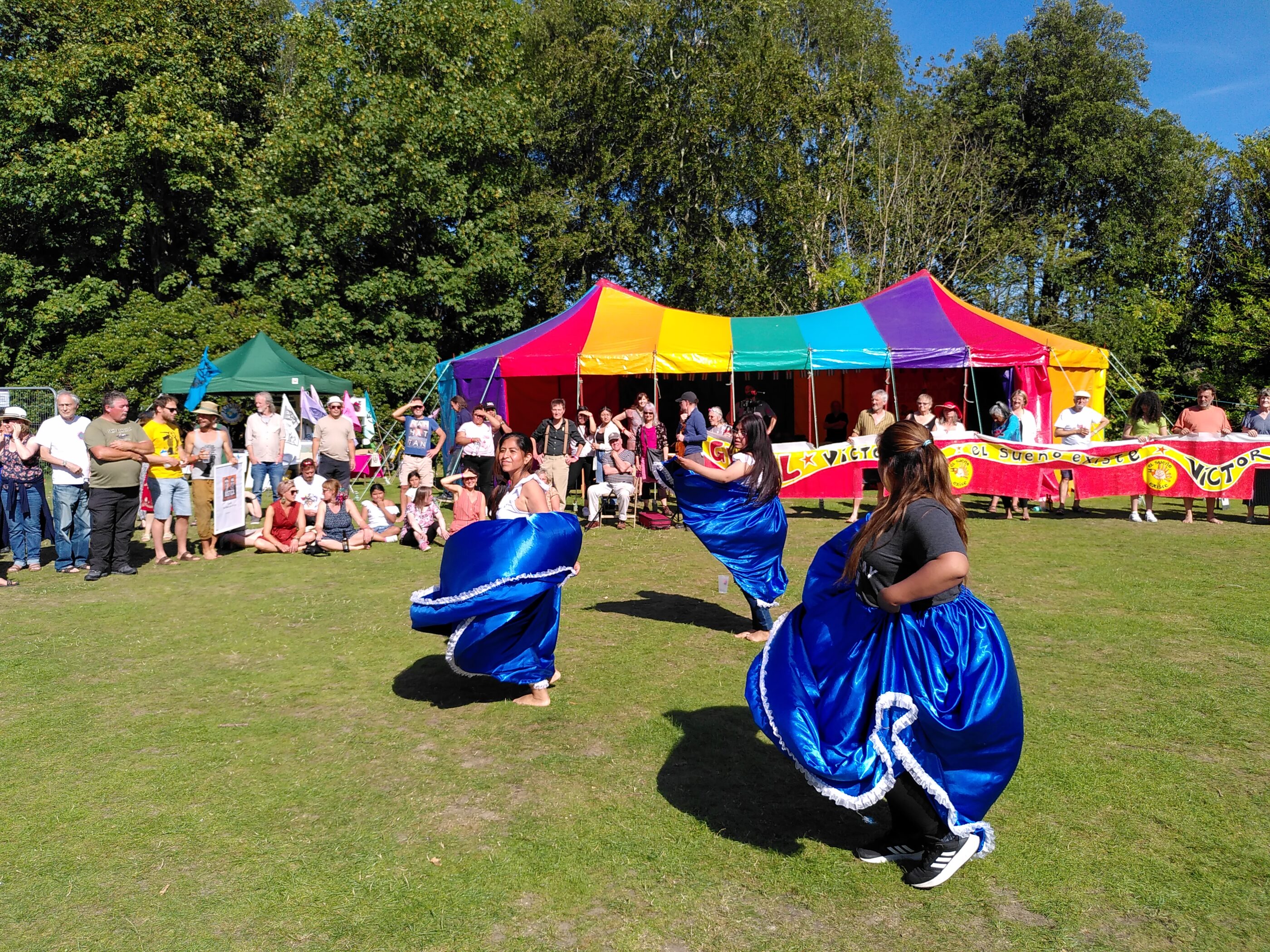 Dancing in the closing ceremony

Meanwhile, we were able to make more local people aware of our work at Bwlch Corog, just 15 minutes away from the town, and re-connect with some existing supporters. One new contact we made was Jeremy Corbyn MP, who has been coming to Machynlleth for El Sueño Existe for many years. Mat and Simon were pleased not to miss this photo opportunity! (No political affiliation implied). The conversation led to a potential new partnership with Jeremy, who works with a group of refugees based in his Islington constituency who have been the victims of torture in their countries of origin. 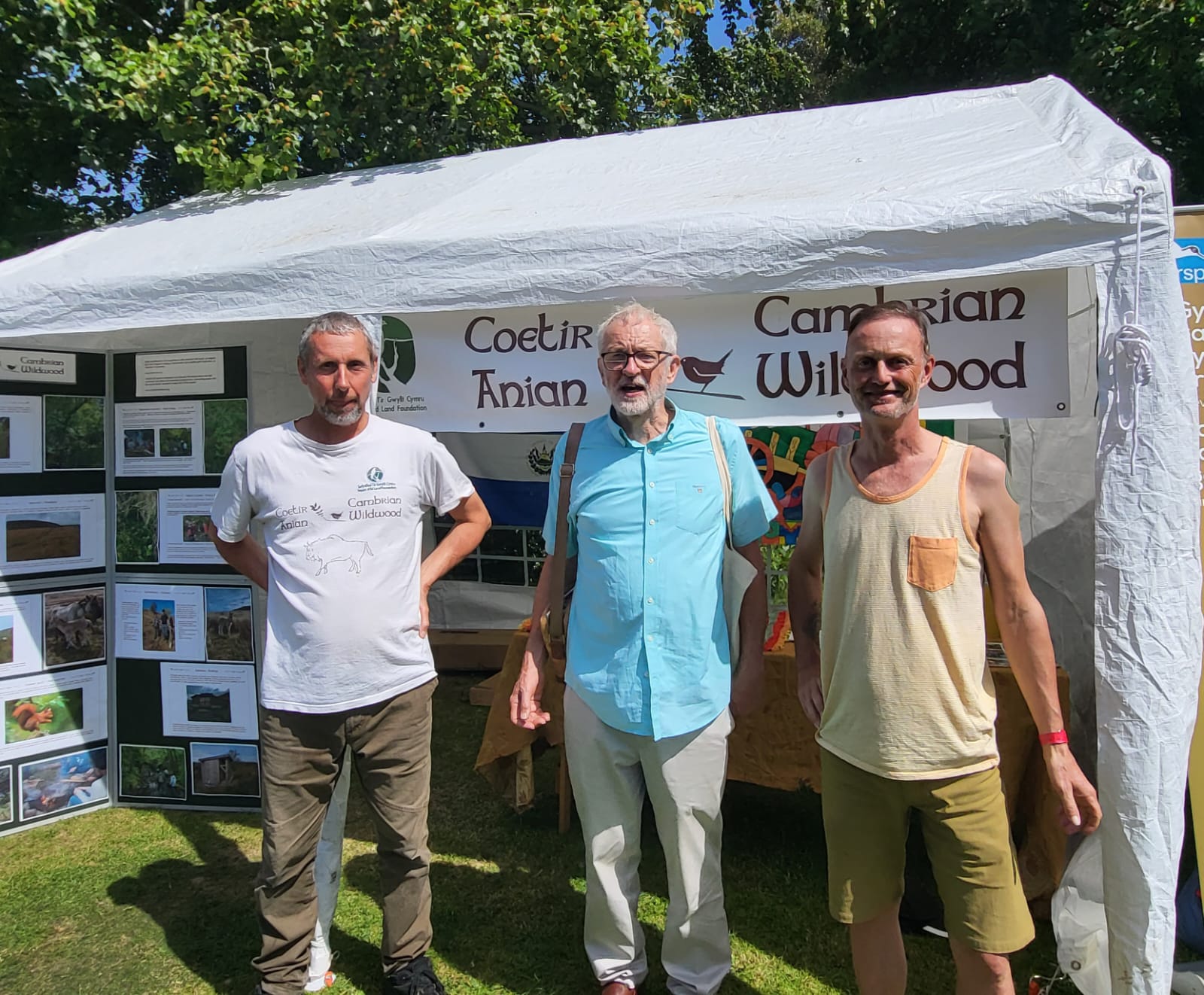 Simon and Mat with Jeremy Corbyn

Some final words from George: ‘Many thanks to all of you for making possible the visit by the Salvadoran asylum seekers to the Festival. Not just for the fact that we could go, but for the generous and enabling spirit in which you did it. It has been a real team effort with contributions from Cambrian Wildwood, El Sueño Existe, Wolverhampton City of Sanctuary, and, not least, by the asylum seekers themselves.’

And George provides some reflections on this rich set of positive experiences:
– People went to a festival for the first time.
– People went camping for the first time.
– Children who had never been to the UK’s countryside saw sheep and cows for the first time.
– The asylum seekers made new friends and contacts.
– They found out about Wales and its language and culture.
– The refugees saw that Latin American cultures were held in high esteem throughout the festival helping their self-confidence.
– We shared a slot in the first session to talk about both City of Sanctuary and Cambrian Wildwood.
– Esmeralda led the prayers in Spanish at the Sunday morning communion service.
– Festival goers met asylum seekers on an equal basis.
– Lots of dancing and music was enjoyed.