In the northern corner of our site a stand of Japanese Larch was planted on what was originally ancient woodland. As part of our woodland restoration work, we are gradually thinning the larch to allow the struggling plant and tree regeneration from the original ancient woodland to re-establish and flourish. Thinning this area has provided us with a very valuable harvest – our own supply of sustainably resourced timber. Using this timber, we have built a compost toilet and a round shed on our land. This has dramatically reduced the carbon footprint of both buildings. In keeping with our desire to be as sustainable as possible, we have sourced any other materials needed as locally as possible and used craftspeople and contractors from our local area.

Construction on the compost toilets began in late April 2019. We contracted Mark Vrionides, a community build project co-ordinator, to plan, design and co-ordinate the build with Esme Walker, a traditional builder and conservator. Local contractors were bought in when necessary and we were helped by some of our regular local volunteers as well as occasional groups of volunteers from further afield including a group of staff from Chester Zoo for a week. This provided an opportunity for skill sharing and for people to learn about sustainable building and carpentry skills.

The compost toilet is of roundwood timber frame construction, with waste collection areas at ground level and steps leading up to 2 separate cubicles on the level above. Due to the whole of our site being off-grid, only tools ‘powered by people’ were used apart from the occasional battery-operated drill. Volunteers spent many hours peeling the bark from the Japanese Larch poles with draw knives before the poles were then individually measured, marked and the joints cut out with chisels. Fourteen large poles were prepared in this way for the timber frame. Mark Vrionides commented, “With the timber coming from trees so close by, this build has the smallest carbon footprint I’ve ever worked on.” 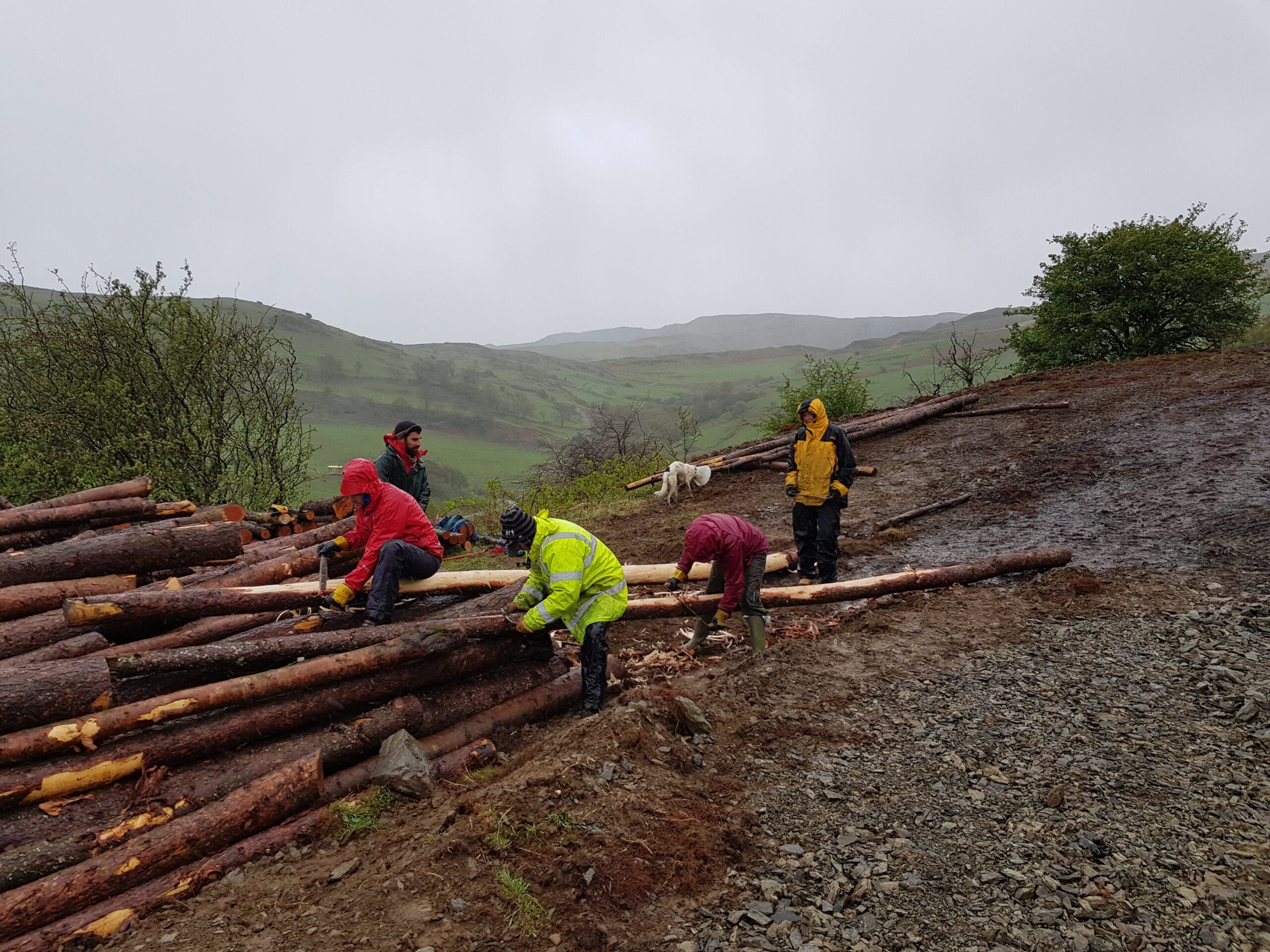 Finally, the big day arrived – the frame raising. All hands were needed on deck to carefully lift and guide the heavy timber poles into position. This required good communication, teamwork, muscle, determination, and rigorous safety measures. 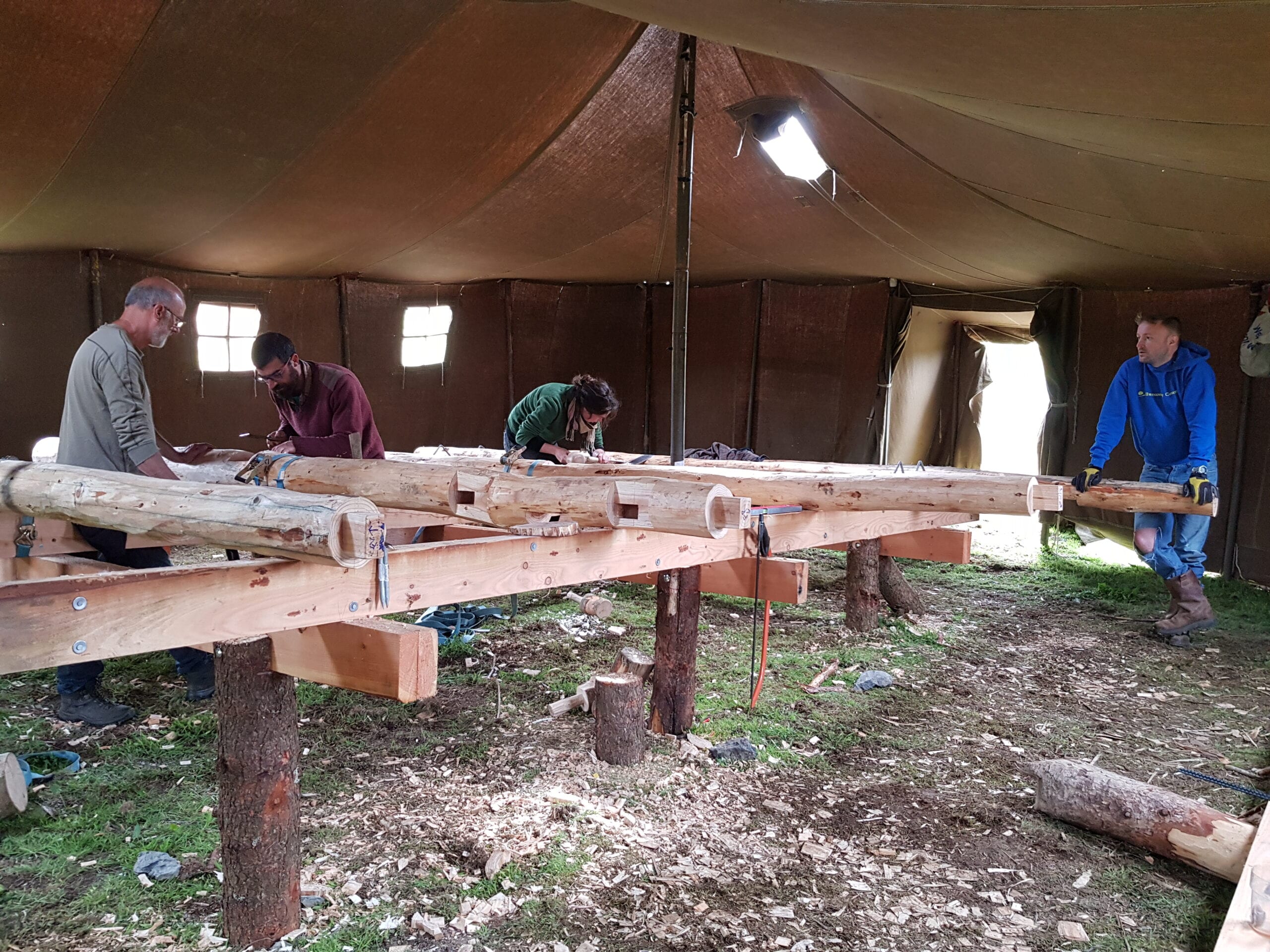 Preparing the poles for the timber frame 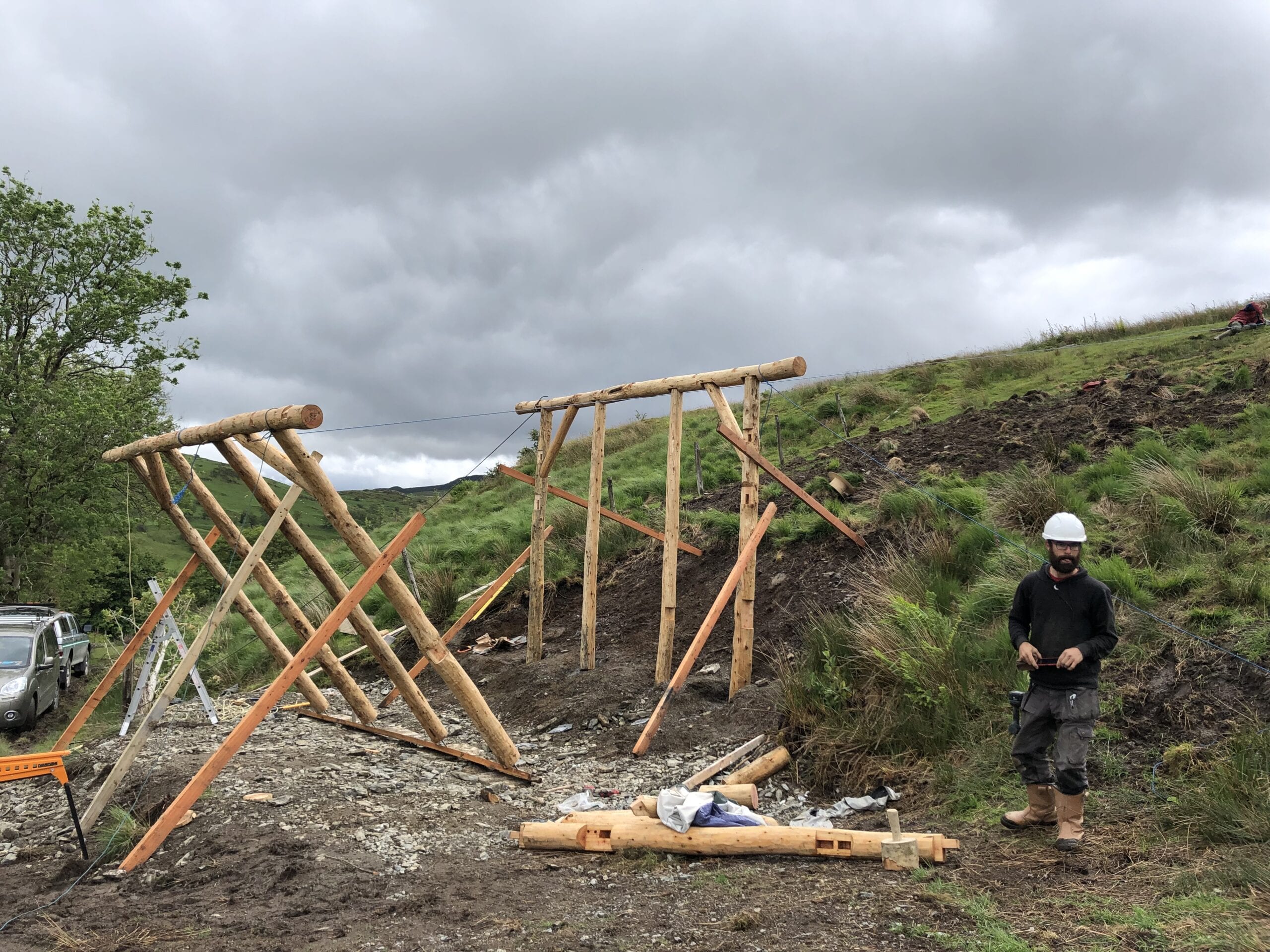 All that remained now was to create a living roof and to build the two ‘thrones’. We wanted a living roof to help the building to blend into its surroundings. Firstly, a layer of pond liner was put down, followed by old carpet salvaged from skips. Stone from around the site was dug and hauled up to the roof to be spread, with a little soil, over the carpet layer. Finally, sedum seed was sown amongst the stone and soil. Trees are being planted around the structure to further help it to blend in with the landscape.

Just over a year after completion now, the wood has mellowed, and the roof is greening over. The compost loos are in regular use and have even provided shelter to some of our local wildlife, with house martins nesting successfully last summer on one of the roofing beams and a family of tawny owls choosing to roost there in the autumn. It seems everyone likes our ‘loo with a view.’ 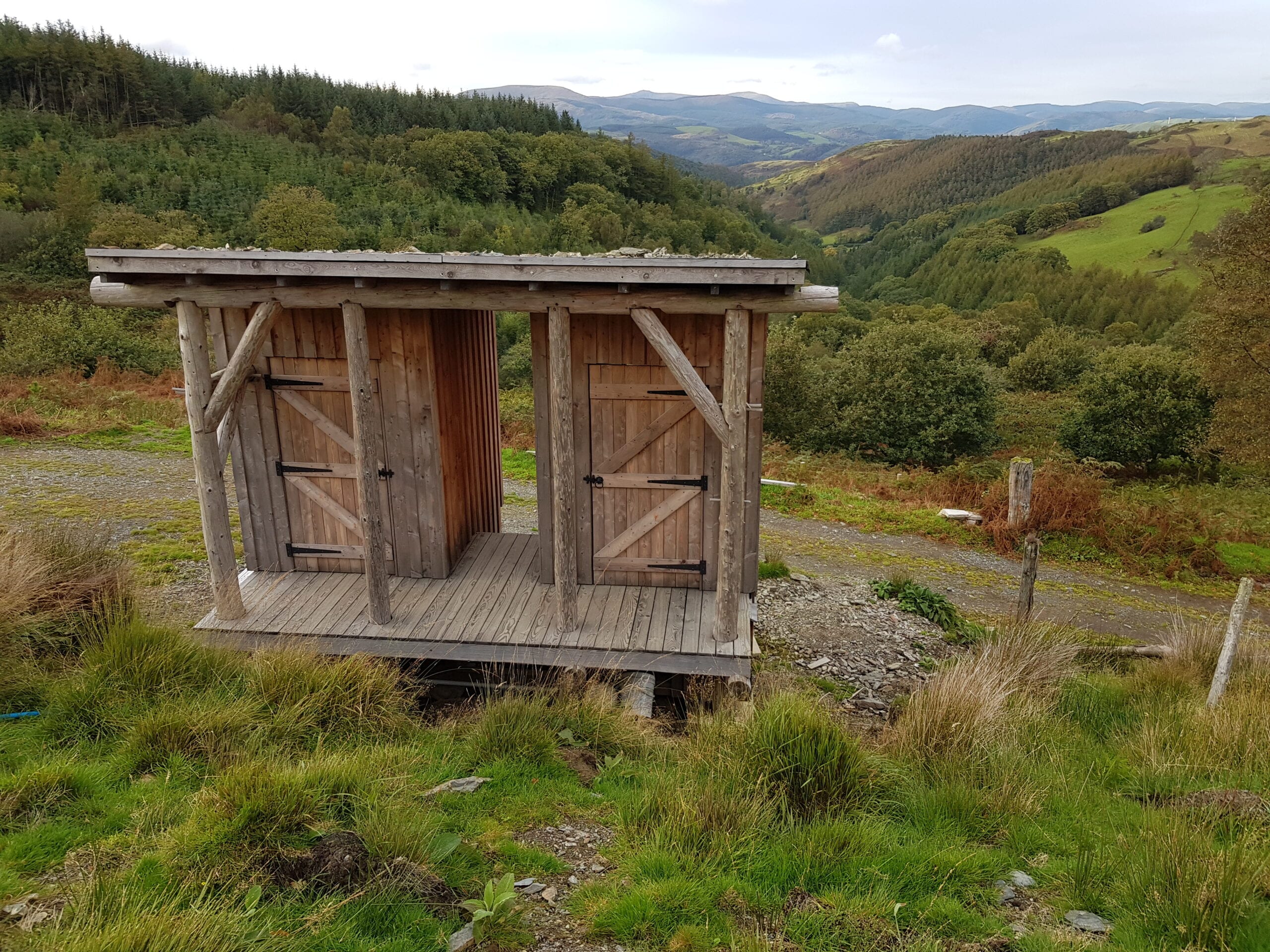 Work on our second build started in August 2019 after planning permission had been granted for a storage shed. Again, Mark Vrionides led the build, with Esme Walker leading the plastering side of the project. We were lucky once again with local volunteers and contractors helping with the build. Mark designed a 9m circular building with a roundwood timber frame and reciprocal roof. A reciprocal frame roof offers an open space inside without the need for a central support. We used a total of 74 of our Japanese larch poles in the construction of the timber frame and roof. For the walls, we decided on straw bales for optimal insulation, rendered in lime. 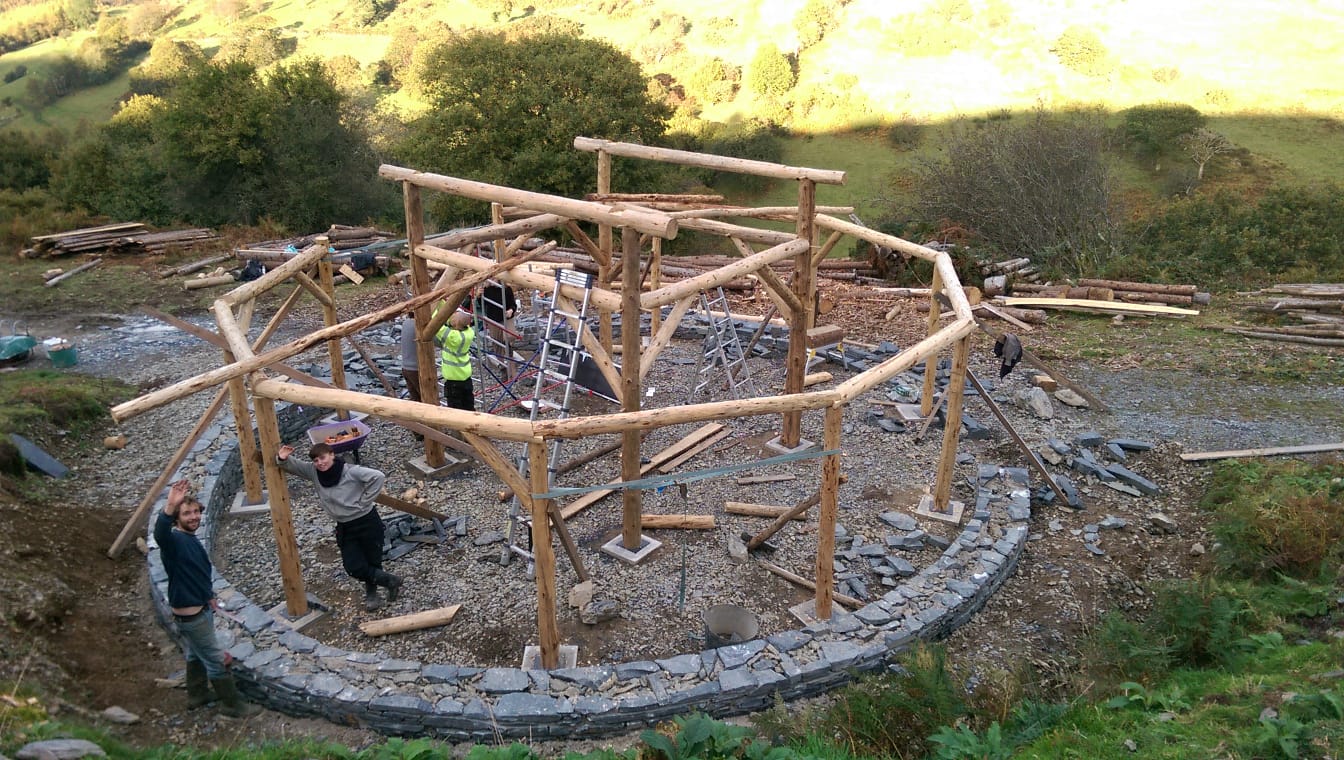 The round shed’s timber frame 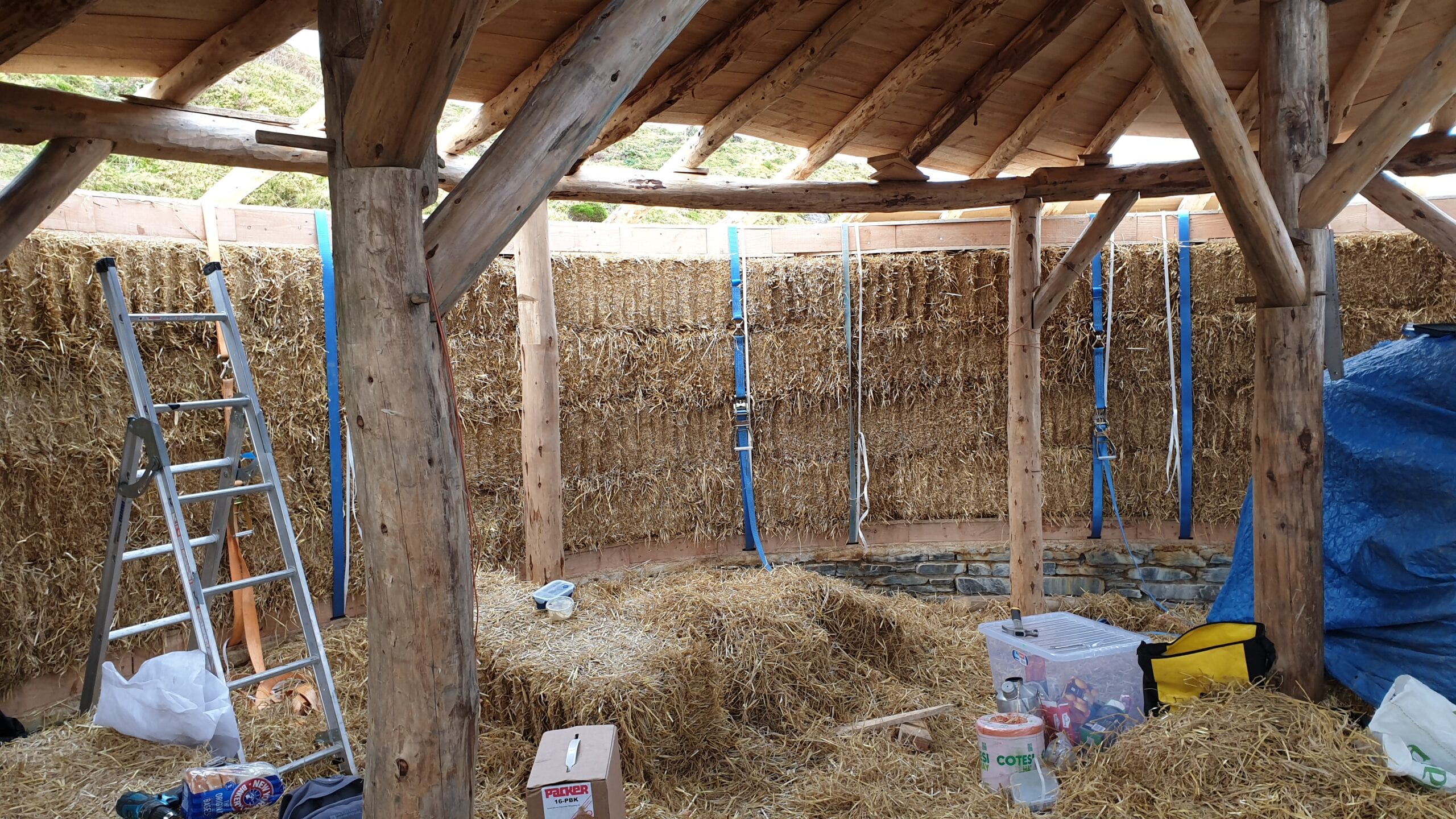 The straw bale walls during construction

Louis Sutton, a local stonewaller, built a low slate wall on the foundations of the outer perimeter to support the straw bale walls and prevent damp rising from the ground, which would cause the straw to rot. Kit Jones, a local straw bale builder, led the building of the straw bale walls. We used 90 bales of barley straw sourced locally from Aberystwyth University. Building with straw bales is a relatively sustainable construction method, using an agricultural by-product. As the cereal crop grows, it takes in carbon dioxide which is stored as carbon in the stalks after the grain has been cut. Straw bales take little energy to manufacture, with the baling process and transportation the only additional energy required. They are also 100% biodegradable and can easily be ploughed back into the earth if they are no longer needed.

Once the walls were constructed, work started on the roof. After the supporting poles were in place, the main roof was covered with chestnut planks before the smaller reciprocal roof with skylight was created above. As with the compost toilet, we wanted a living roof to help our round shed blend into the landscape, so countless buckets of stone spoil dug from near the structure were hauled up and spread across the roof. 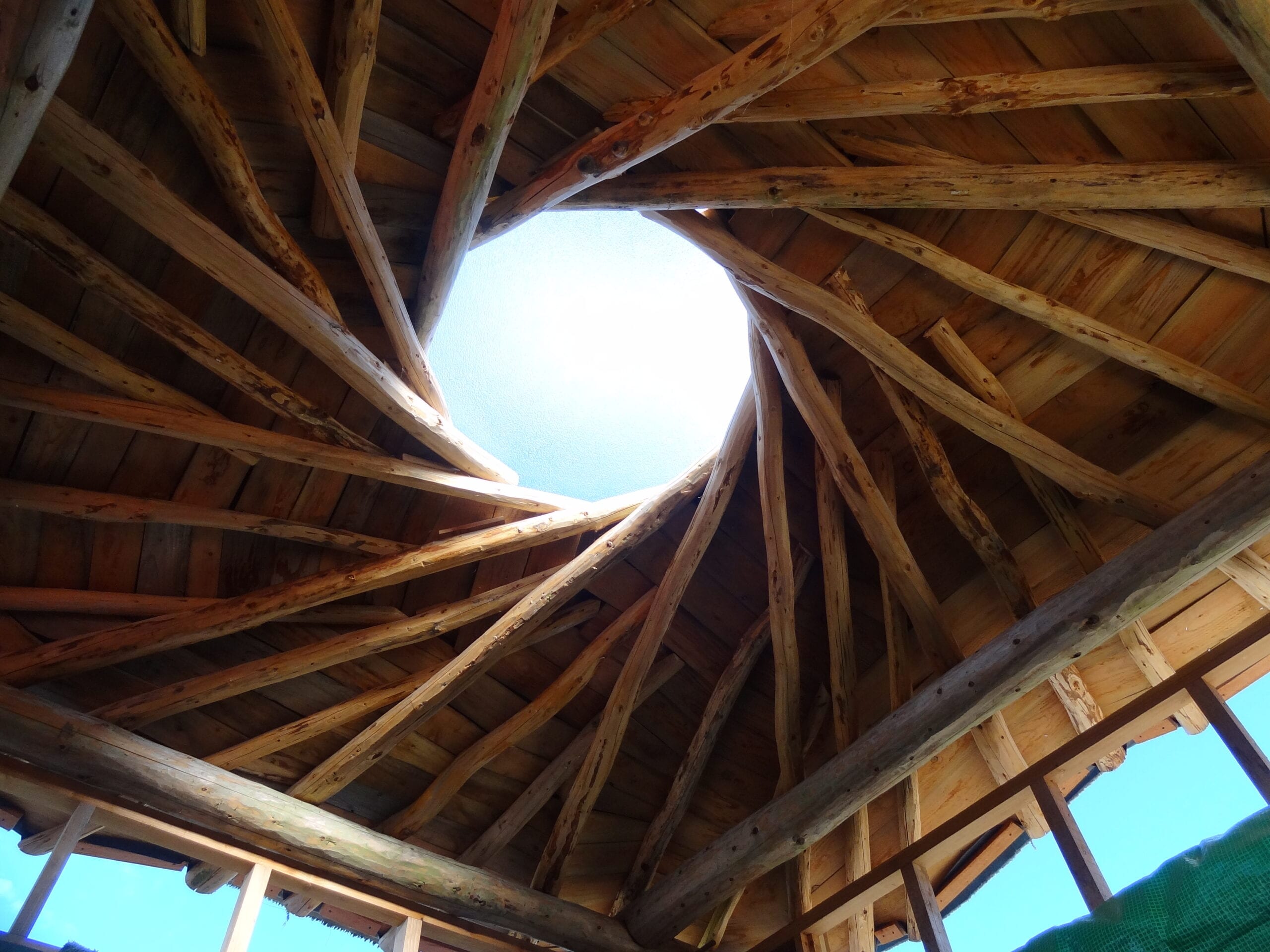 Looking up at the reciprocal roof

The straw walls were covered with tarpaulins over the winter, pending the application of a lime render, which can be damaged by winter frosts. In April 2020, using materials from Tŷ- Mawr Lime Ltd in Brecon, Esme rendered the outside walls with lime and a dashed finish. The inside walls were plastered with clay, using materials from Womersley’s. The walls were then painted with keim paint (a natural, breathable mineral paint) in the autumn. Esme said, “It was great to use natural, sustainable materials, for example the clay which can be reused, and the lime, which takes in carbon dioxide from the atmosphere for 3 months after setting.”

We are looking forward to working with local primary school children on a project to decorate the shed walls once Covid restrictions are lifted. A huge thank you to Mark, Esme and all the local contractors and volunteers who helped build these two wonderful structures. The compost toilets are essential for our school visits, camps, and the comfort of all our visitors to the site. The round storage shed is rapidly filling with tools and equipment for our volunteer days and tasks on the land. Both buildings are invaluable resources for the Coetir Anian project, and we know they will last for many years. 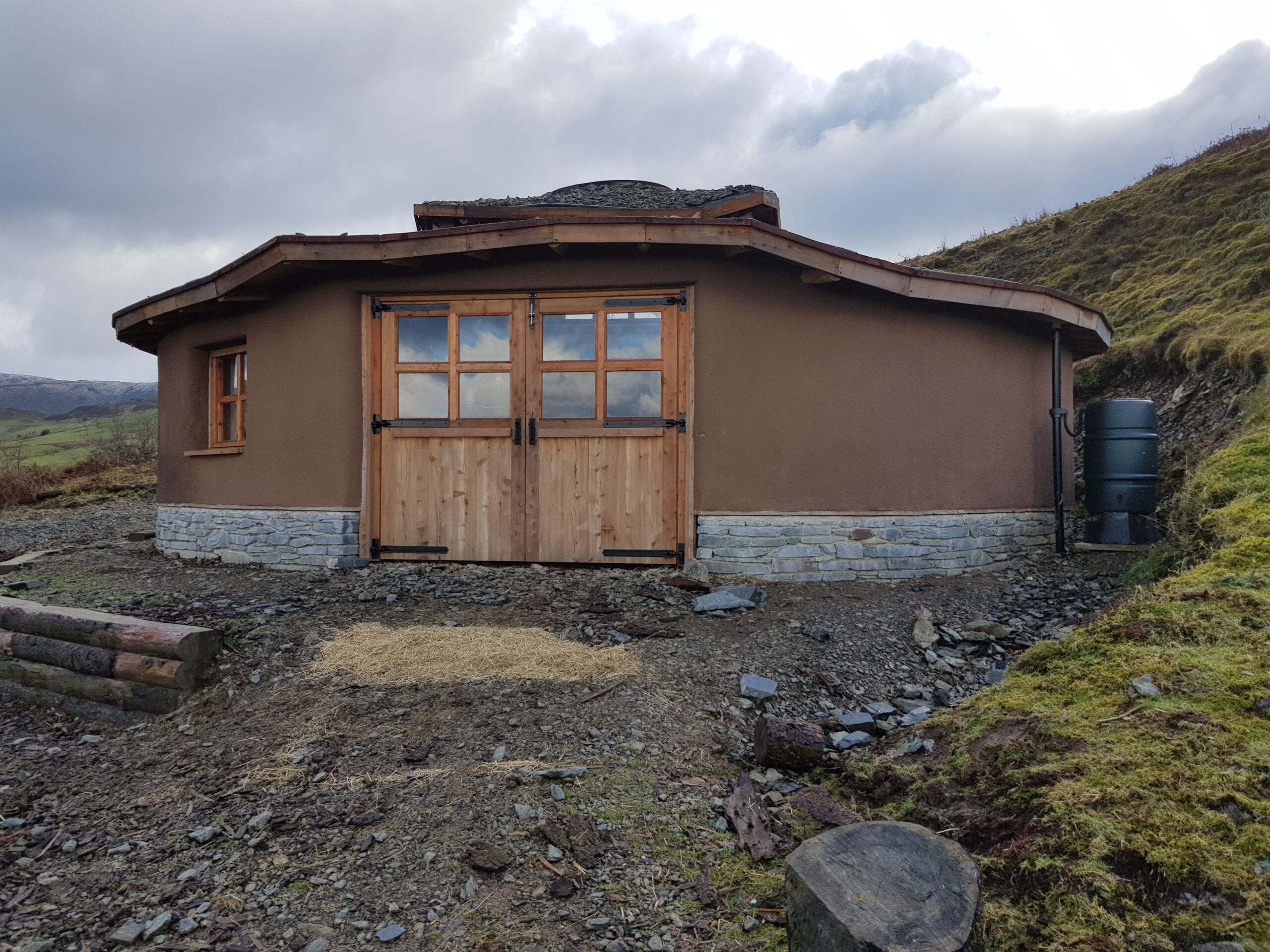 To contact or see more of Mark Vrionides’ work, please visit his website.
Esme Walker can be contacted by messaging us.