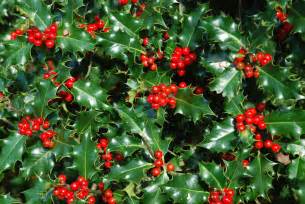 Often small and shrub like, holly can grow to 20m tall and live up to 300 years. Holly is dioecious, meaning the male and female organs are on separate trees. The flowers of the male tree are fragrant but only the female trees produce berries. The bright red berries provide winter food for blackbirds, fieldfares, redwings and thrushes. The mistle thrush is known for vigorously guarding holly berries in winter to prevent other birds from eating them. The leaf litter of holly provides good protection for hibernating hedgehogs, toads and slow worms and in the warmer months, birds nest in its boughs and its tiny white flowers provide nectar and pollen for bees and the caterpillars of the holly blue butterfly.

Holly wood has been traditionally used for knife handles, door sills, joinery, cabinet making, mathematical instruments, engraving and veneering. The wood accepts dyes readily and has been used as a substitute for ebony. Its fine grain makes it suitable for turning fine objects and has been used to make chess pieces, using boot polish to darken them. Holly burns hot and its charcoal was used for making swords and axe heads.

People used to believe that a holly berry or leaf carried in the pocket imparts attractiveness and considered it lucky to keep a small branch hanging outside the house to guard against lightning.