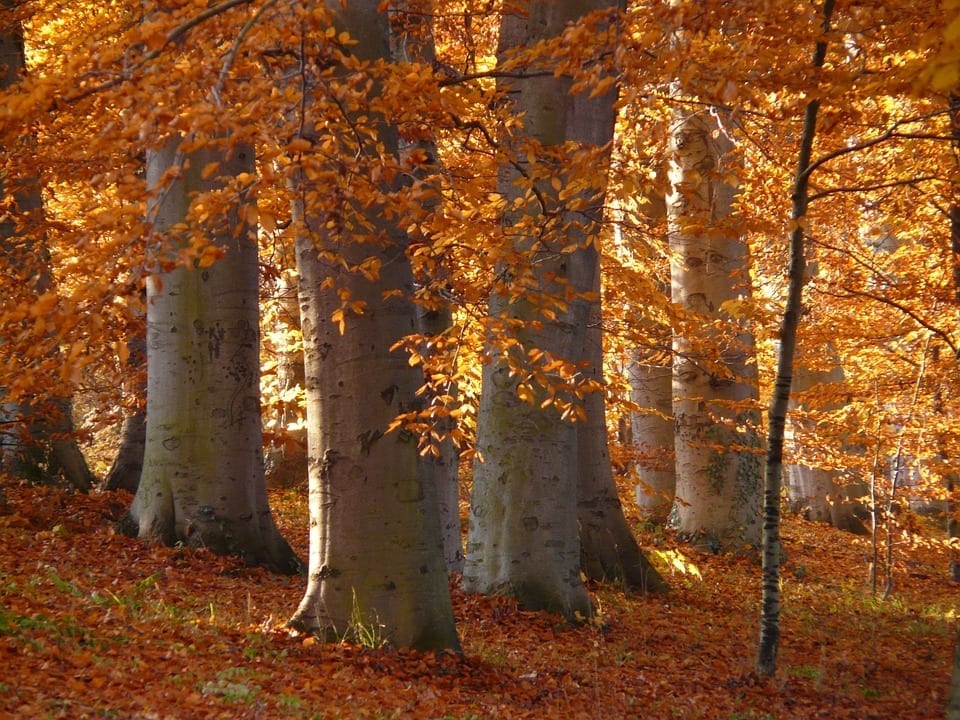 Beech trees are an important and prominent feature of Welsh woodlands that colonised late after the last ice age. With ample space they can grow to heights of forty metres, creating a dense, dome-shaped crown that stretches 40-60 feet wide. Beeches have grey, smooth bark and can be identified in winter by their distinctive copper torpedo-shaped buds. Beeches are ‘monoecious’: female and male flowers grow on the same tree. In early spring male catkins dangle from the branches, whilst the female flowers grow next to a small cup. Beeches pollinate by wind, after which these cups become woody and by autumn will enclose one or two beech nuts. Beech woodland often plays host to Britain’s much-loved bluebell carpets in early spring, which appear before the beech canopy has closed off the light to the forest floor. Chalky beech sites sometimes have rare orchids as well as box coralroot and bitter-cress and pollarded beech trees host many lichens. Beech foliage is eaten by a number of caterpillars and moths, and the seeds and nuts are eaten by rodents and birds. Beech trees can live for hundreds of years and this longevity ensures that species requiring deadwood habitats can thrive in beech woodland, such as wood-boring insects and birds that nest in tree-holes, such as woodpeckers.

Beech has many uses as timber and is used for furniture and cooking utensils. It burns well, with a strong, calm flame, and is traditionally used to smoke herring. In the past it has been used for medicinal purposes when poultices of beech leaves were brewed to help swelling.

The ancient wisdom associated with beech trees is rooted in the practice of using thin slices of beech to write upon and make books. The Anglo-Saxon word for beech was ‘bok’, the root word of the modern English ‘book’. Henwen, the great white sow of Welsh mythology, ate beech nuts and in doing so possessed the great wisdom that beech trees hold.