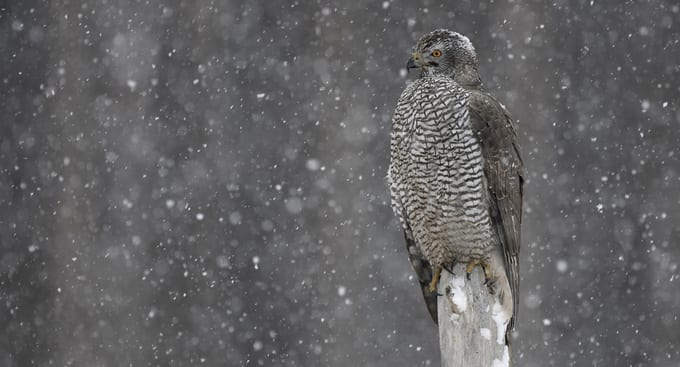 Goshawks are a large hawk, almost as large as a buzzard, the female being larger than the male. They are distinctive for their eyes, which are yellow in juveniles, deepening to red or orange in adults. Goshawks are efficient killers, swift and controlled, swooping through trees to snatch their prey completely unaware in their talons. Although goshawks mainly eat woodpigeons, crows, rats and rabbits they do take some game birds. This led to their persecution throughout the UK during the 19th century, resulting in extinction until the 1960’s saw the beginning of both accidental and deliberate releases. Goshawks need dense woodland to feed and nest; they make up to 70% of their kills in woodland areas and, if undisturbed, return annually to their same nesting site.

The best time to spot them is during late winter and spring, when they break cover for their ‘sky-dance’ display, during which females and males swoop and plunge in a dramatic dance of courtship.

In the Middle Ages people nailed dead raptors to their doors to ward off witches and evil spirits. Goshawks commanded great respect at that time and people avoided uttering their name for fear of attracting hardship and death. In the Mabinogion, Pwyll Prince of Dyfed offers gifts of hawks to the King of Annwn (the Otherworld).

Status at Cambrian Wildwood: Absent. Goshawks breed in other areas of mid-Wales, so may arrive here naturally.